Diamond does the business again at Galway 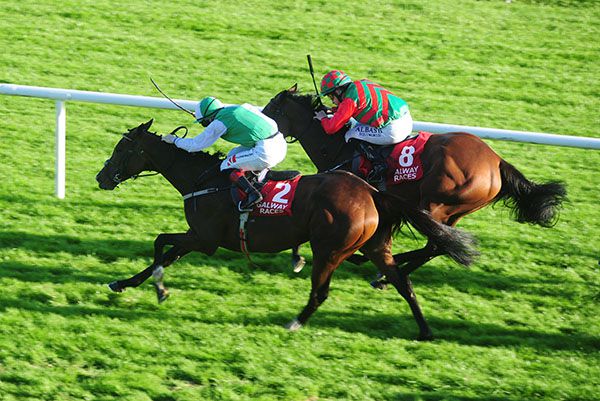 Diamond Hill emerged on top after a thrilling finish to the Ardilaun Hotel Oyster Stakes at Galway this evening.

Willie Mullins' charge was switching back to the Flat in the Listed contest having scored over hurdles at the festival meeting.

Colin Keane took his time on the well-backed 5/2 favourite (5/1 this morning) before making ground on the outer turning for home. Camphor got a nice split on the rail and that pair settled down to fight it out after claiming game front-runner Warnaq just inside the final furlong.

It was Diamond Hill who gave owner Annette Mee yet another winner at Ballybrit when edging ahead close home to record a hard fought neck victory.

The winner was recording her third win at the track having also landed a Flat maiden over course and distance last year.

Keane said afterwards:- "I was talking to Patrick (Mullins) beforehand and he said that at Bellewstown she raced behind the bridle for most of the race and she was a little slow to warm up.

“He said don't panic too much. We went nice and even, she travelled into it well, and was good and game in the finish.

"I was following Shane (Foley) for most of the way and coming into the dip he went in. I was after getting stopped once or twice this evening so I was making sure that wasn't happening again.

"She will be a right filly for those big staying handicaps and they'll have plenty fun with her."