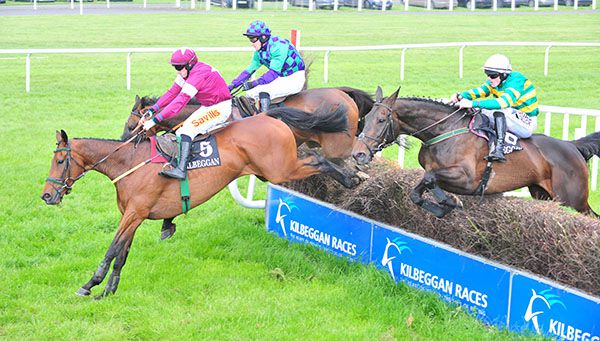 After receiving a nasty kick from Fr Gilligansvoyge in the parade ring before the fourth, Ricky Doyle ended his day on a high by taking the feature, Kilmurray's Homevalue Hardware Mullingar Handicap Chase, on Don't Let Go 0ASuccessful in a maiden hurdle at Ballinrobe in August of 2017, the Conor O'Dwyer trained victor failed to score in eight starts last year.

She was however placed three times in 2018, and was a good third behind Mac N Cheese on her most recent start at Punchestown last month.

Sent off at 8/1 this afternoon, the daughter of Yeats raced towards rear, taking closer order from four out.

She was pushed along in third from the second last and was ridden to the front on the run-in, going on to score by a length and a quarter in the colours of owner JP McManus.

Hugo 'N Taz (8/1) finished second under Andrew Ring for Denis Hogan, while Stoneford (7/1) was a length back in third. Freewheelin Dylan & Allee Bleue were sent off the 3/1 joint-favourites and they finished second last and last respectively.

O'Dwyer said afterwards: "That was super and a great pot to get with her. She's been in and out a bit but I'd say she's better over fences.

"She got caught in a bit at Downpatrick and Sligo over hurdles and didn't enjoy it. She'd a great run in Punchestown the last day which gave her a bit of confidence, and the small field today suited her.

"That's a hurdle and chase won with her now but I'd say she'll definitely stay chasing now.

"Ricky gave her a super ride and I just told him to go out and ride her with plenty of confidence, wait all day, and he did that. He's a very good 5lb claimer and a great lad in the yard.

"He got a right kick earlier (in the parade ring before riding Fr Gilligansvoyge) but that will perk him up a bit."

D.N. Russell, rider of Allee Bleue trained by Gordon Elliott, reported to the Clerk of the Scales that his mount stopped quickly.

The Irish Horseracing Regulatory Board Veterinary Officer examined Freewheelin Dylan, trained by Dermot Anthony McLoughlin, at the request of the Stewards and reported the animal to be post race normal.

The Irish Horseracing Regulatory Board Veterinary Officer examined Allee Bleue, trained by Gordon Elliott, at the request of the Stewards and reported the animal to be post race normal.