Dream getting better for McGuinness and Daly 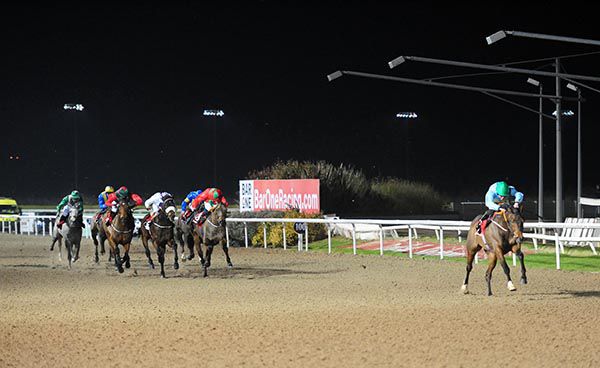 “I was giving out about the handicapper the last night but I'm going to take him for a drink tonight and see if I can sweeten him up!” quipped Ado McGuinness after his Chaparral Dream (11/8 favourite) impressively supplemented his Dundalk gains from a fortnight back in the penultimate event tonight on the polytrack.

Not many would have believed that the market-leader would ultimately prevail by eight lengths, given the unpromising position he was still in as they turned into the straight in the Kentucky Derby Qualifier at Dundalk March 1st Apprentice Handicap.

Tom Madden had been told to drop the four-year-old in, but his connections and backers were pinning their hopes on the pace collapsing from over a quarter of a mile out.

Chaparral Dream really hit top gear when required, to lead over a furlong out, before stylishly defeating market-rival Dream Focus (5/2).

“He looked impressive there but it wasn't a wonderful race. They went hard and quickened up well, I didn't think he'd quicken up as well as he did," elaborated McGuinness.

“I knew he had improved a little bit from the last time. He was a weak horse last year.

“He'll go summer hurdling later on the year and I think we'll have a lot of fun with him.

“I just hope the handicapper is not going to slaughter him. Fingers crossed he won't.

“Dan Daly is a great patron of mine. He's been very lucky and hopefully this fella will progress more.”

N.M. Crosse, rider of Rockafilly (FR) trained by J.A. Nash, reported to the Clerk of Scales that his mount lost her action.