Eastern Racer sees it out best for Foley 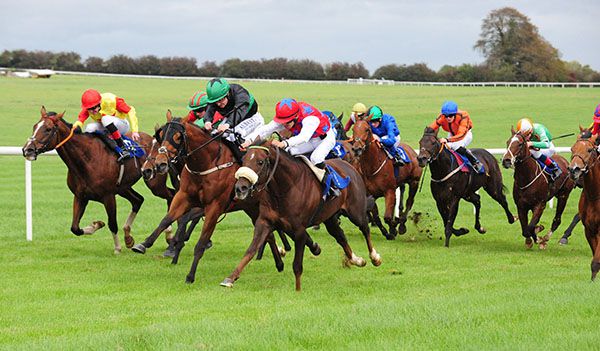 Eastern Racer (20s into 16/1 on course) was produced with his challenge by Shane Foley racing towards the final furlong of the Moyne Handicap, and he kept on well to defeat the flattering Duhallow Noelie (33/1) and the staying-on Asanda (8/1) by three quarters of a length and the same.

The hat-tricking seeking 5/2 favourite Travelwise finished back in ninth place.

The winning seven-year-old won six sprints in his younger days when trained by Brian Ellison, but this was his second win over a mile this year in Ireland.

He was acquired by present connections, for 12,000 Euros, after finishing third in a claimer at Sligo in August for Denis Hogan.

"It took a while to get him there, he wasn't altogether right but we have him now, said winning trainer Sean Byrne.

"He likes a cut in the ground and he held on well today.

"Hopefully we'll have more fun with him and he ran well in Dundalk the last day. We'll look for something similar now and he can come back in trip as well."