Elliott 1-2-3 in Down Royal feature 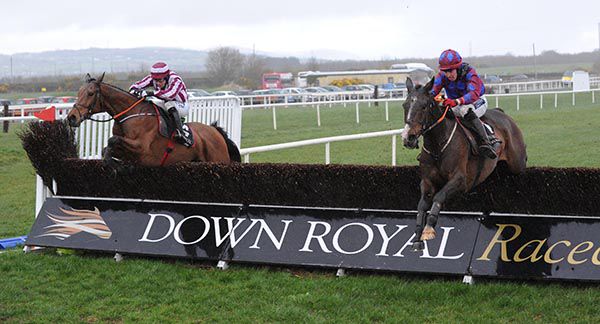 There was a one, two, three for Gordon Elliott in the featured BarOneRacing.com Chase at Down Royal as the Keith Donoghue-ridden Jury Duty (3/1) led them home. Baie Des Iles fell three out leaving Elliott's Mala Beach (evens) in front.

However American Grand National hero Jury Duty took over from the last to score by six and a half lengths. There was a gap of twenty eight lengths to the other Cullentra House representative Don Poli in third.

Assistant trainer Ian Amond said: "It was a nice surprise as Mala Beach looked the obvious one.

"He has had a nice break since America and we were hoping he would come and run a good race and put him right for the National.

"It's a bonus he has gone and won so his next stop now is Aintree. Then he will go back to America, there's a race in May for him.

"They will probably all go to Aintree."