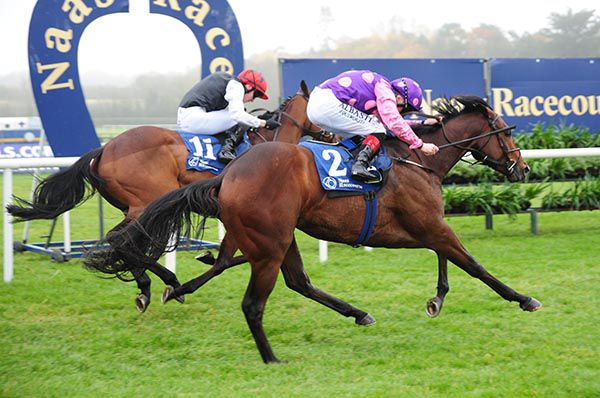 Elusive King showed the benefit of a debut run here a fortnight ago and in the process provided Chris Hayes with a nice spare winning ride in the Irish Stallion Farms EBF Maiden at Naas.

Trained by Ken Condon, who was out of luck with Trais Fluors in the Breeders’ Cup Mile at Santa Anita yesterday evening, the well-backed gelding just got up in the final stride to deny Soul Seeker

Available at 16/1 earlier in the day and sent off a 7/1 chance, Chris Hayes’ mount prevailed by a nose with Madaket Mystery two lengths back in third and Woodford General finishing nicely close-up in fourth.

Hayes said, “I was confident that he’d get there and travelled real strong. Colin(Keane)’s horse (Whoareyouanyway) got a bit upset in the gates beside me and my lad was standing a bit awkward and missed it a fraction. On the conditions it probably helped.

“I thought under two furlongs out it was a case of me just letting him go but when I did he paddled on the ground and I thought I was after leaving it too late.

“He’s a genuine horse and coped with the ground and I think he’ll improve on better ground. He could go for something like the Madrid Handicap next spring if Ken wants to go that way. Hopefully he has a light weight!

“It was a spare ride. I was due to ride something else which ended up not being declared. Billy (Lee) and Ken are obviously in America so it was a nice one to pick up. The ground is a real war of attrition.”