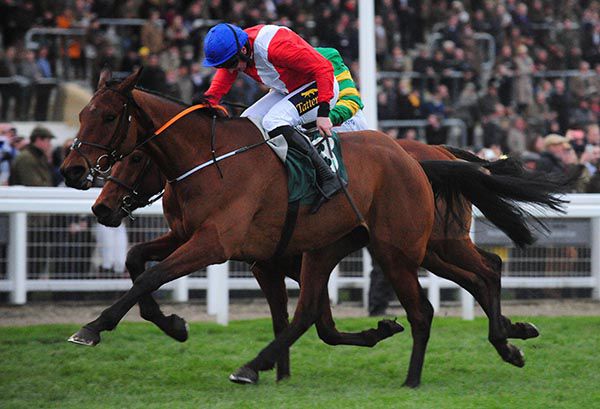 Trained by Gordon Elliott, who was completing a double on the day having earlier scored with Tiger Roll the point-to-point winner arrived with the best credentials as he'd already won three bumpers.

Having drifted throughout the day in the market due to Elliott enduring a quiet start to the week, the money came pouring in late on following the earlier victory of stablemate Tiger Roll in the cross-country chase.

Eventually sent off the 2-1 favourite, Codd charted a wide path on the £400,000 purchase to avoid any scrimmaging

Edging towards the centre of the track travelling well, he suddenly had a fight on his hands as Barry Geraghty emerged on Willie Mullins’ Blue Sari his main market rival at 7-2.

Envoi Allen stuck on gamely, though, and joined A Plus Tard as a winner for the owners this week, while Codd was also making it two after his victory on Le Breuil in the National Hunt Chase.

Eliott said: “We think he is a nice horse. He is a horse for the future. We are delighted. The four-year-old was getting 8lb.

“I’d imagine that would be it for the year. He is a horse to go hurdling, all being well. He is going to be a three-mile chaser. He is the real thing.

“Mr and Mrs Richardson (of Cheveley Park Stud) have been really good to send me horses. To get a Grade One winner at the Cheltenham Festival is unbelievable.

“We rode him not to be knocked around as he is a horse that likes to get into a rhythm. He was bought to be a three-mile chaser. That’s a long way away (next year’s Festival), an hour is a long time in this game.

“Two hours I was in the ground and now I’ve had two winners, it’s unbelievable.”

Mullins said: “We’re happy with that from a four-year-old running in testing conditions.

“We always expected the winner to pull out more, which he did. He’s a good staying chaser.

“We had a good run. He could go to Punchestown, but it depends how he comes out of this. We’ve a nice gap between now and then.”