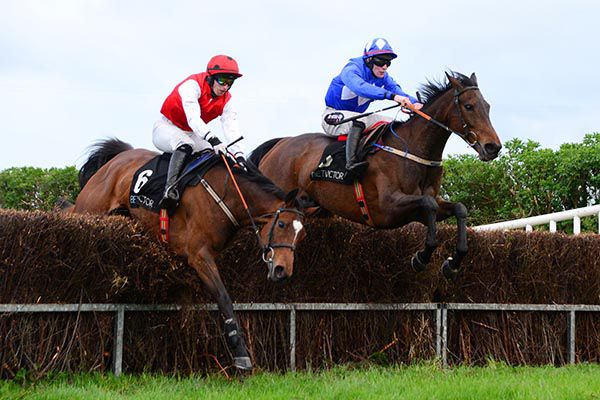 There was drama aplenty in the Follow @BetVictorRacing On Twitter Irish EBF Mares Beginners Chase and it was Gracemount (13/8 out to 5/2) that came out on top in race five at Kilbeggan.

Gracemount was easy to back in the ring having been supported earlier. Money came on track for two of them, Payngo (16s into 8s) and Tell Me Annie (11/8 into evens).

Tell Me Annie disappointed, finishing fifth, but Payngo ran a cracker and she was on terms when falling at the last.

Under Harley Dunne Gracemount was likely getting the best of the battle in any case and the J J Kavanagh-owned and Sean Doyle-trained Beneficial mare was left clear to beat Mega Mindy by twenty one lengths. Boragh Beat was thirty three lengths back in third.

A man walking the track had a lucky escape. He appeared to be on the phone when jumping under the rail, out of the way of the runners, as they approached the straight.

“Harley said she was a bit fresh early on but he thought he had the measure of Mags’ mare (Mullins' Payngo)," said Doyle.

“She travelled nicely and I think further again would suit her better. She jumps well and would have done a lot of schooling before she went point-to-pointing.

“She’ll keep going and I’m looking for a wet summer.”