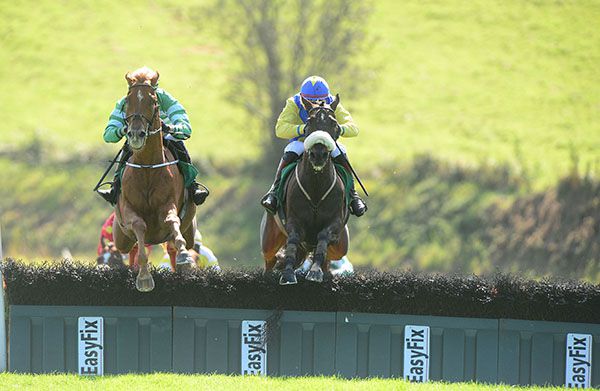 Northern Ireland football's Greenandwhitearmy is in excellent shape at present and the horse of the same name landed the Ulster Carpets Maiden Hurdle at Downpatrick today for owner/trainer Neil McKnight and jockey Ricky Doyle.

The gelded son of Craigsteel was held up by jockey Doyle for much of the race and eventually was produced with his challenge from two out. On the run-in Greenandwhitearmy quickened past long-time leader Mr Moondance before scoring a three parts of a length success.

Trainer/owner McKnight later said: "he's a quirky sort but we were hoping he would get in the money. I thought the other horse (runner-up Mr Moondance) had got away from him but he battled well up the hill.

"He's actually better over 2m5f and we'll keep him going and he could come back here for the next meeting."

The Green and White Army are fans who follow the Northern Ireland national football team and the team currently sits top of Group C, ahead of Germany, in the 2020 European Championship Qualifiers.

Linfield F.C. also play a vital Europa League play-off round, second leg tie away to Qarabag on Thursday as the northern club lead 3-1 from the first leg.