Jakoby stays on best under O'Sullivan for Meade 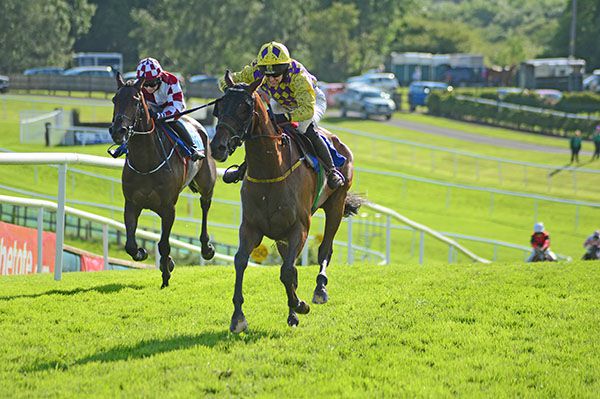 The Noel Meade trained Jakoby kept on best to take the last at Downpatrick, the Down Time Festival (Ladies Pro/Am) Flat Race.

Having caught the eye when a staying on third at Kilbeggan on his last start, the five-year-old son of Frozen Fire was sent off a 7/2 chance today.

Settled towards rear by Maxine O'Sullivan, the Maureen Hunt owned gelding gradually made progress through the field on the final circuit.

He went in pursuit of the front-running Santana Plessies from the four furlong pole, and was ridden to lead inside the final 150 yards, going on to score easily by seven lengths.

Santana Plessies, who was returned the even money favourite, had to settle for second under Lisa O'Neill for Gordon Elliott, while the Brian Hamilton trained Arakan Quest (20s to 12s) was a massive thirty-eight lengths back in third.

Meade said afterwards: "I wouldn't usually keep running a horse in blinkers in bumpers. He's a very, very well-bred horse - I think the dam is a half-sister to the winner of the French Derby.

"He just hasn't been that fussed about the racing game. In fairness to him, he has been getting better and better and he stays really well. He wants three miles. He has got a little bit more generous with racing.

"It's great that Maxine came up the whole way from Gort to ride him. A good gallop was a big help as well. Stamina seems to be his forte.

"He stays well and she had seen him run a few times and she knew that was what he would do.

"He will go hurdling now, I'd say he will go on any ground."

The Stewards interviewed Ms L. O'Neill, rider of Santana Plessis (FR), concerning her use of the whip in the closing stages of this race. Evidence was heard from the rider concerned. Having viewed a recording of the race and considered the evidence the Stewards were satisfied that Ms L. O'Neill was in breach of Regulation 10.3 (e), in that she used her whip on an area other than down the shoulder or the hind quarters. Having considered her record in this regard, the Stewards suspended Ms L. O'Neill for 2 racedays and reminded her of her future responsibilities.

Ms K. Ferris, rider of Orena Bay trained by W J Bryson, reported to the Clerk of Scales that her mount lost co-ordination in the closing stages and pulled up.