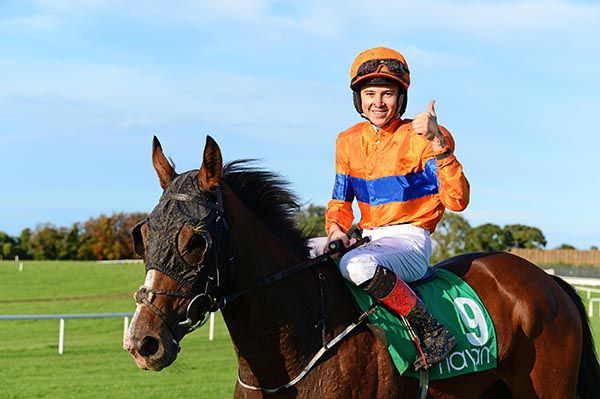 Having ridden over 200 winners on the pony racing circuit, sixteen-year-old Browne McMonagle finished second on his first racecourse ride at Gowran last month.

Now based with Joseph O'Brien, trainer of Jumellea, the Letterkenny teenager settled his mount well off the pace, with the 20/1 chance taking closer order on the inner from early in the straight.

She was ridden and got to the front over a furlong from home, staying on strongly from there to score by six lengths. Mean Fomhair (7/2fav) had to settle for second under Colin Keane for his father Ger, while Passing Trade (8/1) and Getaway Katie Mai (6s to 4s) were third and fourth respectively.

"It was great to get my first winner for Joseph. It couldn't have went any better as my family are here and it's a great day, said Browne McMonagle.

"She's been running over a mile-and-a-half and a mile-and-six, and on the soft ground did it well today. I just took my time up the inside and at the top of the hill I let her roll on. She won well.

"I had 218 winners at the pony racing. It's good experience and a good grounding for all the young jockeys coming up. It's good to have it behind me."

Joseph O'Brien was completing a quick double on the card, having won the previous contest with Degraves

The Stewards fined Michael Mulvany, trainer, E65 for failing to fit the declared head gear to Stormy Tale prior to entering the parade ring.