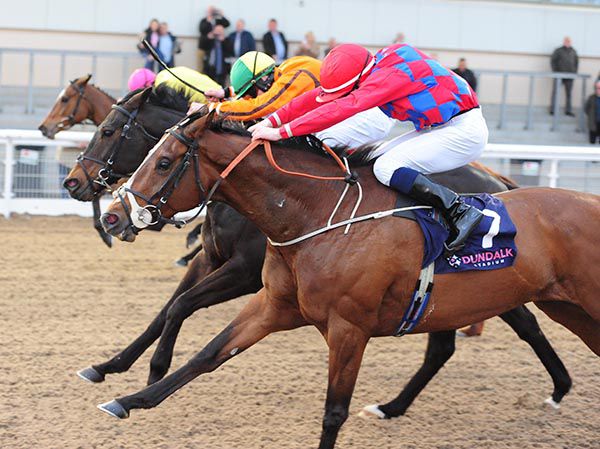 Gavin Ryan came in for praise following his first ride for Pat Martin at Dundalk today as the apprentice jockey steered the trainer's Lady Rosebud to a fifth career and course success in the Crowne Plaza Race & Stay Apprentice Handicap.

The daughter of Sir Prancelot was today ending an 11 race unsuccessful spell as she came out best in a three-way photo-finish, beating Mulzamm by a nose. There was a head back to third-placed Cautious Approach which was an unlucky loser, having met trouble and being hampered entering the home straight in an incident where her jockey Donagh O'Connor was almost unseated.

Following Lady Rosebud's win, trainer Martin stated “it’s been a while coming! I’ve tried to get this chap (jockey Gavin Ryan) for a while as I think he rides very well. It’s the first time I have been able to get him.

“She’s been threatening to win a race for a while having run some stinkers last year but she likes this time of the year and she loves here. I thought he was very strong on her, and she seemed to battle for him.

“She will keep going on the grass. I don’t think the ground is that big a difference to her but she likes nice ground.”