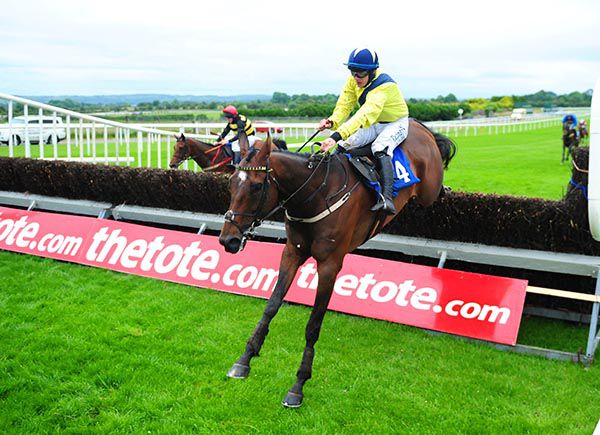 The Kerry Group Handicap Chase is the feature on the first day of Listowel’s Harvest Festival this afternoon.

A total of 11 runners have been declared for the 40,000 euro contest, with Henry de Bromhead’s Deans Road topping the weights.

The 10-year-old won his penultimate outing at Tipperary before finishing fifth behind the classy Ballyoisin at Killarney.

De Bromhead also runs Killiney Court who as usual will have the assistance of 7lb conditional jockey Hugh Morgan.

Jim Dreaper’s Sizing Rome enjoyed plenty of success last season and won a decent even at Fairyhouse in April. He stopped quickly as if something was amiss last time out, but has been given plenty of time to get over it.

Willie Mullins runs Ask Susan while Gordon Elliott is represented by Mrs Lovett and The Big Lense Gwencily Berbas has his first run for Eric McNamara since being sold by Barry Connell. On the best of his old form he could be dangerously handicapped.

The Mullins-trained Wicklow Brave is the undoubted star on the card in the Cheesestrings Novice Chase.

The incredibly versatile 10-year-old has won an Irish St Leger, a Punchestown Champion Hurdle and claimed Cheltenham Festival glory in the County Hurdle.

He is two from two over fences, having had his attentions switched to the larger obstacles earlier this year, and Mullins has already started his ambition to make him a highest level in all three disciplines. This event looks an ideal stepping-stone. Zola also looks another likely winner for the champion trainer in the Charleville Cheese Maiden Hurdle, while her stablemate Stratum who has won big races on the level, is the one to beat in the Kerrymaid Hurdle.

Owned by Tony Bloom, Stratum finished ninth in the Galway Hurdle, but got back to winning ways last time out on the Flat at Killarney. With that confidence-boosting win he should take all the beating again.