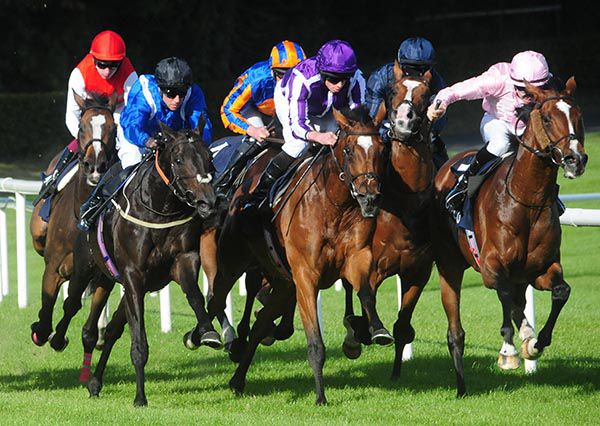 There didn’t appear to be a very strong pace on, and Ryan Moore (third winner of the afternoon) was always handy before committing his mount inside the two furlong marker.

She quickened up well to win by two and a quarter lengths and a head.

The Japanese mare Deirdre (11/1) was held up towards the rear and was short of room at a crucial stage when the pace quickened early in the straight. Switched out for racing room by Oisin Murphy, she ran on well to be a closing fourth at the line.

The British raiders Elarqam and Headman didn’t pick up in the straight, nor did the well-fancied Madhmoon

It was a fourth winner on the day for O’Brien, and an eighth victory in this race, bridging an eight year gap since So You Think was successful in 2011.

“We were delighted with Magical, said the winning trainer Aidan O'Brien.

" She had a mid-summer break and her first run back was in York. She ran Enable to a couple of lengths and we knew she was going to come forward a good bit.

“We knew she was going to be in real good shape for today and I couldn't have been happier with her.

“She's a lovely filly. We know she gets the mile-and-a-half and handles an ease in the ground, she was back to a mile-and-a-quarter today on fast ground. Ryan gave her a lovely uncomplicated ride.

“There are an awful lot of people involved at home, it's a big team.

“She had really come forward from York. She came out and travelled like that and quickened the way she did, Ryan said she doesn't do much in front, she's a very exciting filly.

“This was the second race of her autumn campaign program and she's really something to look forward to.

“The plan was to go to the Arc from here but usually what happens is we see how they come out of it, talk to the lads and they see if they stay on the program or go a different way. It's something great to have to think about.

“This filly ran against Enable last year and was only beaten three-parts-of-a-length in the Breeders Cup.

“She ran against her in Sandown and it was much the same. When we gave her a break this summer she changed into a different filly and she did the same thing last year.

“She was just ready to go to York. Our plan there was to follow John's other filly but William just kept coming back off Enable and our filly was a little further back than she wanted.

“Ryan didn't get a run until he got straightened up but she still ran very well. Obviously Enable is a great filly and when we saw her running that well against her we were looking forward to this race and the autumn after that.

“It's important for everybody that when the best horses are around they run again each other whenever they can and there is no side-stepping.

“I think that's what makes racing for the owners, the trainers, the jockeys and the public. That's what everyone wants to see.”

“John, Michael and Derek will decide on whether or not to keep her in training.

“We'll try get her to the end of the year safe and compete in the races that we can. To have her even at four is an absolute privilege. She's a very special filly and those fillies are like hen's teeth, they don't come along very often.

“She's a sister to Rhododendron as well so it's an unbelievable bloodline.

“This is a very prestigious, world renowned race. At the end of nearly every race there are very few races, if any, have a higher rating with the horses that run in it.

“It happens constantly, year after year. We've been trying to win it every year and the years we haven't won it we've tried very hard so it's fiercely competitive.

“Horses come from all over the world and it's great to have a Japanese runner.

“We were delighted with Anthony Van Dyck. We knew that Ascot was a non event with the ground and we knew we could put a line through that run.

“It was great to see him come back that way. It was his first run back after a break so we look forward to him the next day.

“We had it in our head that he would go to the Breeders Cup Turf. He's a lovely moving, good ground horse.

“Obviously he's in the Arc, but he could go straight there. The lads said they might keep him in training next year which would be exciting for us.”

"Magic Wand a lovely filly as well. She can do the likes of Hong Kong and all those places. She loves fast ground and anywhere from a mile to a mile-and-a-half.