Mark Walsh wins on 1st ride back from injury 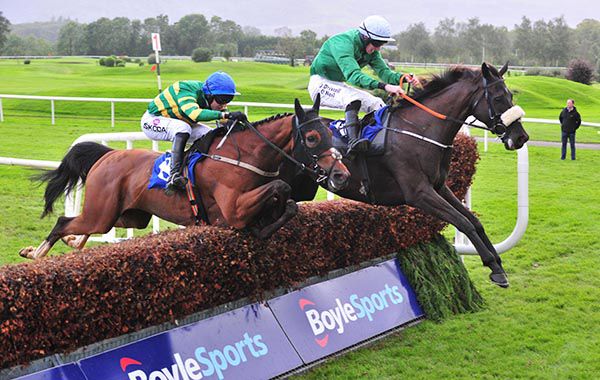 Act In Time (11/2 into 9/2 favourite) won the Owens McCarthy Claims Specialists Handicap Chase for the second year running at Killarney. For winning jockey Mark Walsh it was a comeback winner on his first mount back from injury.

Walsh sustained a broken right leg at the Punchestown festival in May and no doubt he’ll be thankful to trainer Padraig Roche for having Act In Time cherry-ripe for a dream return.

Last year’s second, Black Scorpion finished third this time, as Smithscorner (10s into 7s) principally put it up to Act In Time.

Half a length split them as they drew eight and a half lengths clear of Black Scorpion.

"It's great for Mark to get back with a winner and he has been in with me for the past month or so. He was in getting fit and it's great to give him a winner," said Roche.

"This horse has only won three times and the three times have been around here so he likes the place and he won this race last year.

"He will go to Listowel next for the same race as he slipped up in last year - he would have been better off falling in it as he tried to save himself and gave himself a wrench. It's great to get him back."

The Irish Horseracing Regulatory Board Veterinary Officer examined Das Mooser trained by Mark Fahey, at the request of the Stewards and reported the animal to be blowing hard post race.

The Irish Horseracing Regulatory Board Veterinary Officer examined Feeling The Love trained by Mrs John Harrington, at the request of the Stewards and reported the animal to be post race normal.