McCullagh doubles up at the Curragh for in-form Oxx 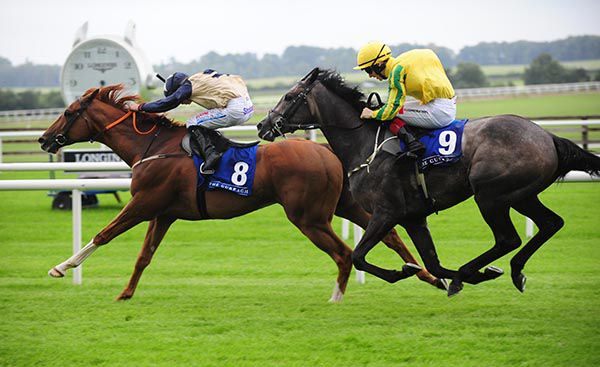 Niall McCullagh rode his third winner of the Derby meeting and his second of day two when triumphing on John Oxx’s Agent Zigzag in the under stARTers orders Handicap at the Curragh.

Indeed McCullagh could have had a treble at this ‘twilight meeting,’ had Ice Cold In Alex enjoyed better luck in running in the previous heat. His other win was aboard Crafty Madam for Ken Condon in the fillies handicap.

Following on from recent winner Dromana and Scotts Honor, Agent Zigzag kept up the good work for the John Oxx yard.

The 14/1 victor was given most to do by Nickajack Cave but he held that rival by three parts of a length with a length and a quarter to Sky Seven in third.

Agent Zigzag had hit the front early in the straight.

“The horses are running well. They are doing their best and are in good health,” said Oxx.

“This fella started off the year well and had two good runs, over a mile at Navan which was too short, and then just beaten a couple of heads in Cork at this distance.

“We decided then to be clever and stretch him out to see if he would be better but that didn't work.

“I'd say that's his ideal trip and he likes a big track, he has a big stride and is a big horse. We'll keep him to some similar.”

The Irish Horseracing Regulatory Board Veterinary Officer examined Cuban Hope trained by J. S. Bolger, at the request of the Stewards and reported the animal to have made a respiratory noise post race.

W.J. Lee, rider of Tipitena (GB) trained by W. McCreery, reported to the Clerk of Scales that his mount ran short of room inside the final furlong and he had to sit up.