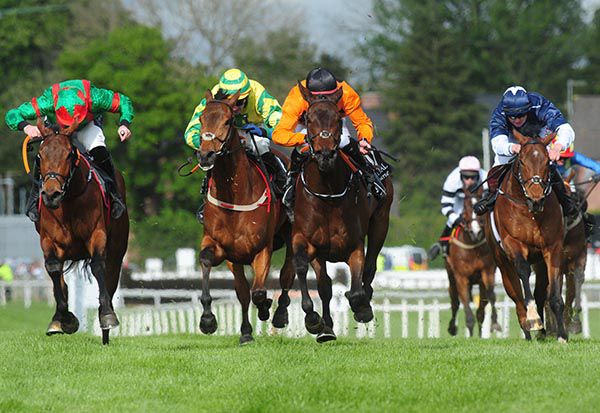 Tritonix stayed on strongly to take the last at Down Royal this afternoon, the Racing TV (Pro/Am) INH Flat Race.

Fourth to Sixshooter at Leopardstown on her penultimate start, the Gavin Cromwell trained four-year-old was since sixth of fourteen behind Mount Ida at Wexford.

Sent off a 14/1 chance today, the bay daughter of Nathaniel raced towards rear under Conor McNamara.

She was ridden and came with her effort over a furlong from home, staying on best in the closing stages, getting up to prevail by a neck. Global Society who was sent off the 4/5 favourite, was the one just denied, with Jamie Codd aboard this newcomer for Gordon Elliott.

The Brian Hamilton trained Darkest Day (5/1 from 20s this morning) was another length back in third.

McNamara said afterwards: "When she first came from the sales at Newmarket we always liked her, her work but was always very good. For some reason she just couldn't seem to do it on the track.

"It was definitely the ground (today), she is by Nathaniel - she's a big good-looking filly with a big stride on her. She loved the ground and hit the line well.

"I knew enough about her myself, I always liked her. I'm based with Gavin (Cromwell) four days a week, Tuesday to Friday and he's been very good to me since I started.

"That's six track winners now and the first of the season, so hopefully I'll keep it going."

The winner is owned by the Here For A Good Time Syndicate, and was bought for 18,000 pounds at the Tattersalls Autumn Horses in Training Sale last October.

The Stewards enquired into an incident rounding the home turn involving Ball Breaker ridden by D.J. O'Keeffe, Centaur ridden by Mr T. Hamilton, Clody Valley ridden by Mr F. Maguire and The Miser ridden by Mr N. Gault, where it appeared that The Miser ran short of room and checked. Evidence was heard from the riders concerned. Having viewed the recording of the race and considered the evidence, the Stewards were of the opinion that the incident was accidental in nature and they therefore took no further action.