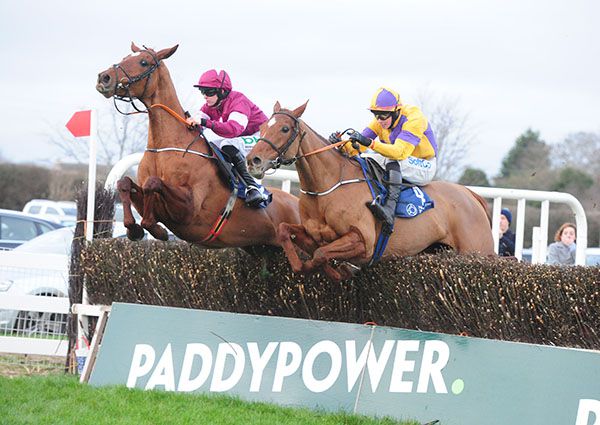 Meri Devie who won three times over hurdles for Willie Mullins, made a winning start to life with Paul Nolan in the mares' beginners' chase at Naas.

The six-year-old travelled sweetly for Bryan Cooper as the pair made progress to close off the home bend.

She jumped the second last just behind High School Days and ahead of Grey Watters.

High School Days, the 5/4 favourite, came under pressure as Meri Devie drew alongside on the run to the final fence.

James Nolan, brother and assistant trainer, said: “With Gordon’s mare (Missy Tata) out it cut up a bit but she was good. We only have her about six weeks.

“She wasn’t bought to do this as she was bought as a broodmare. John (Brennan, owner) said to see how she jumps while she was waiting to go to a stallion and if we felt she could win a chase then let her do that. She schooled well and Bryan was happy with her so that’s why she’s here.

“I don’t know if she will stay racing now to see if she can get some black type. We’ll have to see what John wants to do.

“I thought that she’d need the run as we have done so little with her but maybe it was a little break that she wanted as she was busy on the Flat. Bryan said she’s so quick to jump.”