Morosini too good for odds-on Foveros 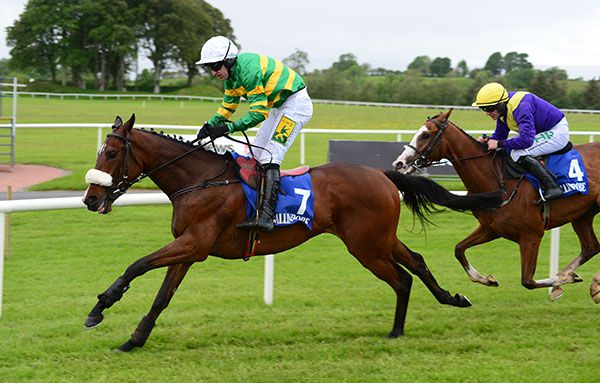 Morosini got off the mark on his second start over flights, as he took the Sheridan Electric Hurdle.

Second on the level on his sole start in his native France, the son of Martaline ran a cracker on his Irish debut at Fairyhouse in February, finishing second to Way Back Home in the Grade 3 Winning Fair Juvenile Hurdle.

Sent off the 11/4 second favourite this evening, the Jessica Harrington trained bay raced in fourth under Jody McGarvey and blundered at the fourth last.

The JP McManus owned victor took closer order from two out and was ridden to challenge on the outer from the furlong pole. He edged to the front inside the final 100 yards and kept on well from there to see off Foveros by a length and a quarter.

The runner-up, who took up the running approaching the last, was returned the 8/11 favourite under Paul Townend for Willie Mullins, while the front running Flindt (20/1) was another two and a quarter lengths back in third.

McGarvey said in the aftermath: "I kept it simple. He travelled, jumped and just picked it up turning in. He did it nicely, going away.

"He made a few mistakes later on, going a little half stride quicker, but it's nice experience for him and he'll be better the next day."