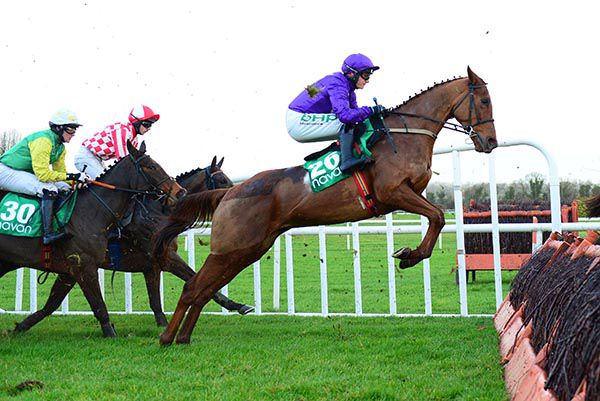 Buildmeupbuttercup and Harrie bid to follow in some illustrious hoofprints in the Sky Bet Moscow Flyer Novice Hurdle at Punchestown on Sunday.

Willie Mullins has dominated this Grade Two contest in the last decade, winning seven of the last 10 renewals.

What is even more notable is that three of those winners — Mikael D’Haguenet (2009), Vautour (2014) and Douvan (2015) — went on to win at the Cheltenham Festival on their very next start, while 2016 victor Min found only Altior too strong in the Supreme Novices’ Hurdle at Prestbury Park.

Even last year’s winner Getabird was sent off a red-hot favourite for the Festival curtain-raiser, so it will be fascinating to see how this year’s Mullins pair perform when stepped up to Grade Two level.

Mullins said: “Harrie is coming back in distance having won at Tramore over two miles and five furlongs and this is a different grade of race, but I think he will be more suited by this sort of trip.

“This will be his first run on good ground so we are not sure about how he’ll handle it, but we’ve been happy with him since Tramore.

“Buildmeupbuttercup ran very well in Navan on her debut over hurdles. She should have no problem with the trip or the ground.”

Ruby Walsh has seemingly sided with Harrie, leaving Paul Townend to take the ride on Buildmeupbuttercup, who was a dual bumper winner in Britain for Mick Channon before joining the Irish champion trainer.

Mullins added: “Both Buildmeupbuttercup and Harrie do lack experience over hurdles, but that has been a narrative of the whole season with horses having to just run when they can, and it is probably the same for a lot of horses.”

Gordon Elliott did not declare ante-post favourite Commander Of Fleet, but still has two chances, with Felix Desjy (Davy Russell) and Swordsman (Jack Kennedy) both in contention.

Felix Desjy was a high-class bumper performer last season and bolted up on his hurdling debut at Galway in October, but has been beaten on his three most recent outings.

Elliott said: “Things haven’t worked out for him since he won his maiden hurdle at Galway, but I thought his last run in Limerick was more encouraging and there is more to come from him over hurdles.”

The latter was last seen winning at handicap at Leopardstown’s Christmas Festival.

“We were very pleased with him getting back to winning ways at Leopardstown last time,” said Harrington.

“Jetez might not be a Grade One horse yet, but he is going in that direction.”