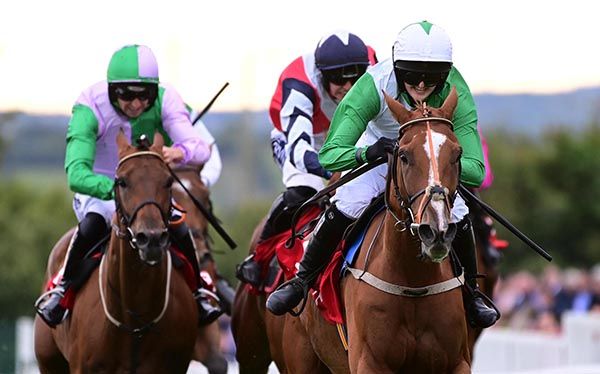 It's rare that Willie Mullins does the bookies a turn but such was the case when Dads Lad sprang a surprise in the Tote-sponsored Qualified Riders' maiden.

With Patrick Mullins choosing to ride Hallowed Crown (fifth) for Plate-winning trainer 'Shark' Hanlon, Ruth Dudfield came in for the ride on Dads Lad who was friendless before the off, drifting from 16/1 out to 28/1.

After tracking the leaders, the three-time jumps winner made headway between horses entering the straight and hit the front inside the final furlong. He stayed on well to defeat Merlin Giant by a length and a half with The Last Mardi back in third.

It was a successful debut under Flat rules for the seven-year-old who had been unable to win in six starts in bumpers in his younger days.

Mullins, completing a treble after winning the first two races on the card with Champ Kiely and Rock Road said: "It surprised me to see him entered for it, as Patrick (Mullins) had him put in for a day out for the syndicate!

"He disappointed me early on but is improving all the time and it is a fantastic day for Liam Cullinan and his syndicate (Whitegrass Racing) and for Ruth Dudfield, who came in for the ride which Patrick organised. Ruth is with us for a couple of years and gets on great with this horse at home.

"She broke well in the race and held her position the whole way. I was afraid she would get swallowed up on the hill but she kept nudging her nose out and kept him in a position."