Murtagh happy with Champers Elysees ahead of Curragh return 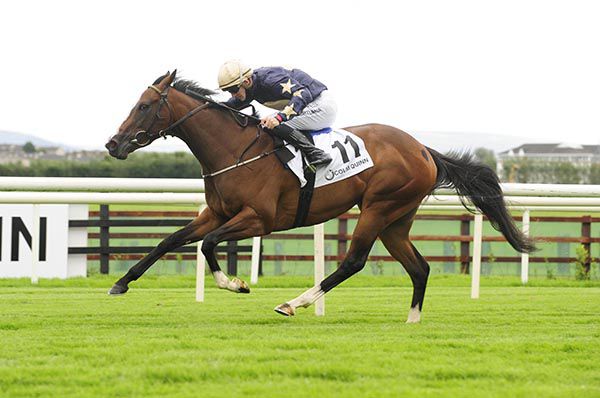 Trainer Johnny Murtagh is looking forward to Champers Elysees rsquo; return to the track at the Curragh for what he anticipates will be a big year for the filly.

She made giant strides in a very short pace of time in 2020, winning a handicap in June and climbing all the way up to landing the Group One Matron Stakes at Leopardstown in September.

However, that success means the four-year-old must carry a 5lb penalty and give between 2lb to 17lb to her rivals on her return.

Murtagh said: “It’s her first run of the season, (but) she’s in very good form

“It can be difficult with a penalty, but it’s a good starting place for her.

“She’s strengthened up, and there’s a big year ahead for her.

“There’s a few nice fillies’ races, and we’re looking forward to Royal Ascot with her.

“We’re not sure which race yet. We’ll have to see how tomorrow goes.”

Jessica Harrington is responsible for three of the nine runners — although No Speak Alexander rsquo;s participation is ground dependent.

“I’m wanting rain for one, and not for the others,” said the County Kildare trainer.

“I want rain for No Speak Alexander. She’s a nice filly. I’ll see what the ground turns up.

“Valeria Messalina doesn’t want it too soft (now a non-runner with the ground gone good to yielding on the straight course). Zaffy’s Pride goes on anything.”

Of the others, Aidan O’Brien saddles Queen’s Speech — winner over the course and distance on her only start as a two-year-old — while Ger Lyons runs the Group-placed Soul Search

A close fourth in the 2019 Derby, Broome had a disappointing 2020 but has bounced back to win both his starts this term — including the Alleged Stakes over this course and distance last month.

Harrington reports Ancient Spirit to have benefited from his first run of the season at Leopardstown three weeks ago — but she is mindful of the tough task he faces.

“He’s got Broome to beat and (Joseph O’Brien’s) Twilight Payment It will be a competitive little race.”

Ado McGuinness has a similar assessment as he sends stable stalwart Salstonstall into battle.

“We’ll be doing his usual, dropping him in — and hopefully he can pick up the pieces and see what happens.

“He’s in good order, and we’re happy with him.”

The Bated Breath colt is one of six previous juvenile winners in a nine-runner field.

Lord Gorgeous got off the mark at Dundalk on his second start, following his debut at Naas in which he was a promising third to Tenebrism.

“He came out of his last race well, but this is a big step up,” said Murtagh.

“It looks a very competitive race. But there’s not many races for him, so we’re keen to see where he fits in.

“It’s a good race. There are lots of good two-year-olds in Ireland at the moment.”

Leading fancies Cadamosto (ground) and Elliptic (off feed) are now non-runners while Fozzy Stack is two-handed with Castle Star (Chris Hayes) and Cheerupsleepyjean (Jamie Spencer over for one ride).