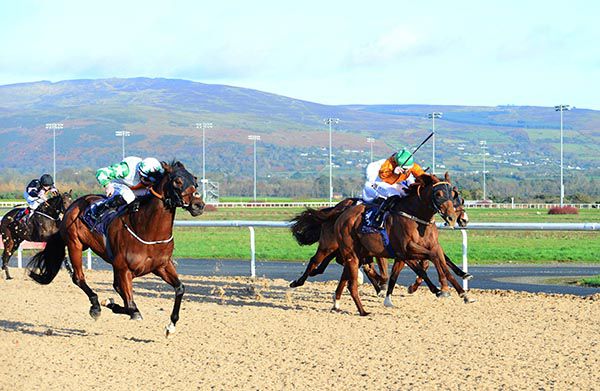 After finishing a well-beaten 8th here in a maiden on Monday, Swift Wing (16/1) struck in the Irishinjuredjockeys.com Claiming Race at Dundalk.

A 1,500 pound purchase by Hilltop Racing in August, this fellow had previously represented his owner/breeder, Lady Bamford, when running for John Gosden and latterly Tom Lacey.

He drifted left in the final furlong this afternoon under Joey Sheridan, necessitating a steward’s enquiry, before his head victory over Royal Admiral was confirmed.

Indeed it was just the same distance twice, to Dalileo and Tonkinese in third and fourth.

“He's a grand horse, we only gave 1,500 pound for him,” said successful owner/trainer James McAuley.

“We just rode him too forcefully the other day. He finished really well on his first run for us, another 100 yards and he would have won, so we thought if we rode him more forward he'd be alright but obviously that wasn't the thing to do.

“Joey gave him an absolute peach of a ride, he was stone last the whole way around, and it's grand that it worked out. He's more than paid for himself now.

“When we got him he was moving well and there didn't seem to be any issue but we got the vet Donnacha Houlihan to have a look at him to check him.

“He did a small little job on him and it's made all the difference.”

D.P. McDonogh, rider of Ardamir (FR) trained by Gordon Elliott, reported to the Clerk of Scales that his mount was badly interfered with in the last furlong.

The Stewards requested a report from James McAuley, trainer, as to the apparent improvement in form of Swift Wing (GB), placed first, as compared with its most recent run. James McAuley stated that his charge was ridden prominently on its most recent run at Dundalk on the 23rd of November and a change to hold up tactics today had helped to bring about the apparent improvement in form. Having considered the evidence the Stewards noted the explanation given.