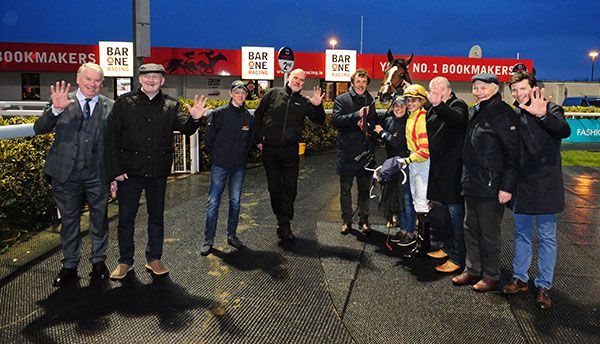 “I always liked her and at least I've been proved right” was the quip from Ado McGuinness after Beau Warrior made it five on the bounce in the Dundalk Stadium Rated Race under Ronan Whelan.

Beau Warrior stumbled slightly from the stalls, but she was soon tracking the leaders, and was third at the halfway stage.

The Total Recall Racing Club's Declaration Of War filly then travelled well and made headway to lead over a furlong out.

Pushed along and soon edging right, Beau Warrior was ridden to assert and stayed on well inside the final furlong to defeat Major Reward by two and three parts of a length.

“We'll definitely try black-type with her. That was a very good performance tonight, particularly with the weight swing with Ger's horse (Kafu - 3rd home). That was a little bit worrying but she put the race to bed quite quickly," reflected McGuinness.

“She settled well tonight, which I thought she might not. There was a good bit of pace on and she quickened up like a good filly.

“There is another race on here next week but we won't be coming. We'll probably wait and go to Cork for a three-year-old only fillies listed race.

“It's over just six. Ronan thought that six would have suited her and would be her ideal trip but the way she hit the line there tonight he said seven would be.

“We were sort of thinking six but we'll tip away with her and see. We'll mind her now and try and get the black-type, that's the most important thing. I might have a top hat on me before the year is out!

“She'll be valuable. A lot of people looked at her after the last race and they knocked her as she's a bit straight in front. I said 'she's not a model — she's an athlete'.

“A couple of American guys knocked her because she's quite straight but it does not stop her galloping.”