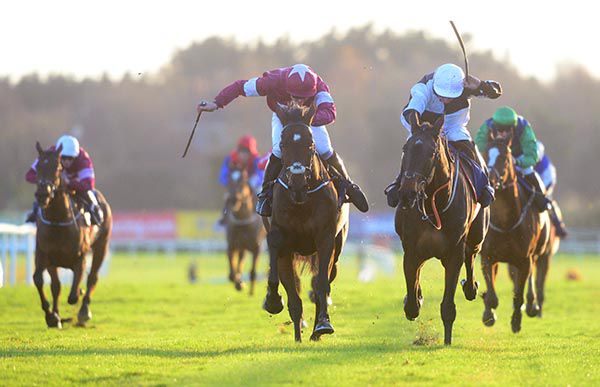 Assemble (25/1 available this morning, 12s into 9/1 on course) got the better of a rousing tussle with Eskylane (5/2) to land the Willie Elliott Memorial (Pro-Am) INH Flat Race by a head.

Not many get the better of Jamie Codd in a driving finish, and this was a real feather in the cap of Oakley Brown, riding his fourth winner of the season, all of which have been for for trainer Joseph O’Brien.

The winner, in a first-time tongue-tie, led early in the straight but looked beaten when Eskylane swept by him outside the furlong marker.

Gordon Elliott would have been keen to land this race named in memory of his uncle Willie, but his charge was foiled as Brown galvanized his mount to get back up close home.

The 7lbs claimer, who rode three winners on the Flat in his native Britain, emphasised what good value he is for that claim with a strong drive to deny the vastly-experienced Codd. Appreciate It (11/4) was two and a quarter lengths further back in third, with the 2/1 favourite Port Stanley finishing in fifth place.

The winner, a son of Getaway, was second in a point-to-point for Eddie Hales and had a good run when fourth to Envoi Allen on the Sunday card at this two-day fixture last year.

He’d been off the course since being a beaten favourite at Limerick last Christmas.

“We thought plenty of him last year and he disappointed us a little bit, said winning trainer Joseph O’Brien.

“He’s done well since and Oakley gave him a great ride.

“He has a good attitude and will go novice hurdling now.”