Pablo makes a very promising start for Lyons and Keane 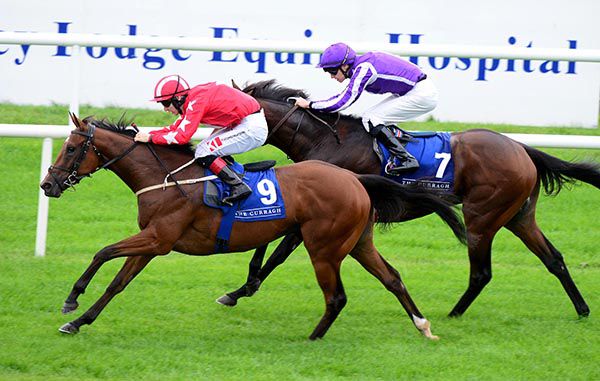 Riding first-timer Pablo Diablo (8s into 11/2) for his boss, Ger Lyons, Keane settled in after ‘bouncing’ smartly on the Zoffany gelding from his far-side draw in two.

Taking lessons from the opener, the entire field went far-side this time and Pablo Diablo eventually got the better of Ballydoyle’s Louisiana by half a length.

Donnacha O’Brien switched on to Louisiana when his original mount Hong Kong was pulled out because of the change in going. Pablo Diablo and Louisiana drew five and a half lengths clear of the third home, Fame And Acclaim

“I’m hoping the owner doesn’t sack me as he sold a brother by Dandy Man at Fairyhouse during the week. He got no encouragement off the trainer and I hope I’m still on the team tomorrow!" reflected Lyons.

“All my Zoffany’s seem to enjoy soft ground. He’s been in training all summer so is fit and ready for ground like this and he just handled it better than the rest.

“He was very professional and had plenty of work done at home.

“There is very few options for him now. I’m running a horse in the Beresford today because there is no winners’ races over a mile. You have to go straight into Stakes races.

“There is the Eyrefield Stakes at the end of the season and that’s it. If you are not good enough then you are in no man’s land. The programme needs adjusting for those with a mile in their head.”

The Stewards received a report from the Clerk of the Scales, Mr Hugh Hynes, that Adrian O'Shea, rider of My Lucky Penny had weighed in at 1.3 lbs overweight. Evidence was heard from the rider concerned who stated that he had rehydrated after weighing out. Having considered the evidence, the Stewards were satisfied that Adrian O'Shea was in breach of Rule 231 (iii). Having taken his previous record into consideration, the Stewards cautioned Adrian O'Shea on this occasion.

R.P. Whelan, rider of Springbank trained by J.P. Murtagh, reported to the Clerk of Scales that his mount checked inside the final two furlongs .

S. Foley, rider of Jungle Cove trained by Mrs John Harrington, reported to the Clerk of Scales that his mount rolled around when under pressure in the latter stages of this race.

S.M. Crosse, rider of Fame And Acclaim trained by Joseph Patrick O'Brien, reported to the Clerk of Scales that his mount rolled left about a furlong from the finish causing him to drop a rein.

The Stewards enquired into an incident about one and a half furlongs from the finish involving Jungle Cove, ridden by S. Foley, placed fifth, Springbank, ridden by R.P. Whelan, unplaced and Miss Molly T ridden by G.F. Carroll, placed fourth, where it appeared that Springbank got tight for room and checked when racing between horses. Evidence was heard from the riders concerned. Having viewed the recording of the race and considered the evidence, the Stewards were satisfied that any interference caused was accidental in nature and took no further action.