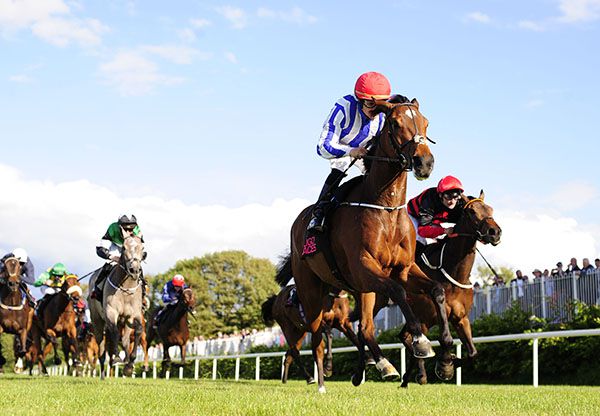 The Jessica Harrington trained Pleasurable defied top-weight to take the first divide of the www.countysligoraces.com Handicap.

Given an initial mark of 72, the daughter of Camelot saw her rating tumble after disappointing efforts at Naas and Dundalk.

A decent fifth on her seasonal debut at Cork last month, the Notable Syndicate owned bay was expected to go close this evening, and was sent off the 10/3 favourite under Shane Foley.

Drawn on the wide outside in stall 13, she was settled behind the leaders on the outer and was pushed along to take closer order from the two furlong pole.

She was ridden to challenge in second with a furlong left to race, and soon edged to the front, keeping on well in the closing stages to prevail by a length. Bionic Tonic (8/1) finished second under Mark Gallagher for Denis Cullen, while Cozy Sky (16s early and from 9s to 7s on-course) was another length and a half back in third, with Declan McDonogh aboard this one for Gordon Elliott.

"She was good. To be honest I never thought she'd be running off this mark on her homework last year. She just disappointed and maybe we were running her over the wrong trip," said Foley.

"She's done that well. It wasn't the strongest race in the world but hopefully she can progress. She's a grand filly."

R.P. Whelan, rider of Dillygass trained by M.Halford, reported to the Clerk of Scales that had to check his mount mid race.