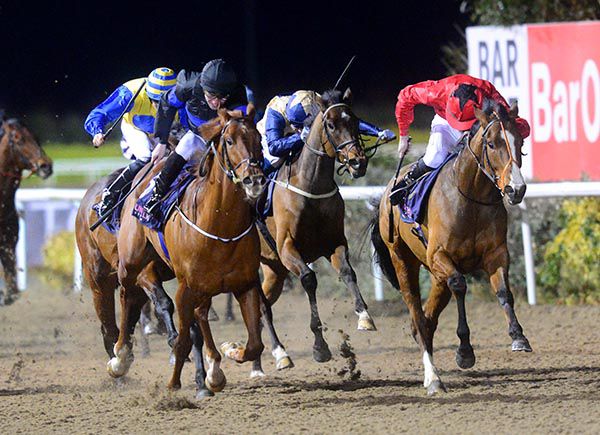 Power Ahead showed the benefit of his debut on the Polytrack earlier this month when landing the Irish Stallion Farms EBF Maiden at Dundalk.

Ridden by Ben Coen and trained by his uncle Andy Slattery, the son of Slade Power was supported at some fancy prices and went off a 12/1 chance in this six-furlong event.

He came home strongest on the far side getting up in the closing stages to deny Never Before who was bidding to give trainer Joseph O’Brien a quickfire treble, by a neck.

The 4/7 favourite Johan Zoffani is proving expensive to follow and could only keep on at one pace two and three quarter lengths away in third.

Ben Coen felt unwell after the race and stood down from his remaining four rides on the card.

Slattery said, “We fancied him and a few lads had a nice few quid on at 40/1 this morning. He’s a nice horse but is still a bit backward and I think that will be it for the year now.

“He’s homebred by a neighbour of mine Kevin Walsh who is a farmer just over the road. He was at the breeze ups but didn’t sell.

“He’s a nice horse for some of those three-year-old sprint handicaps early next year. He will improve as he was still a bit green.”