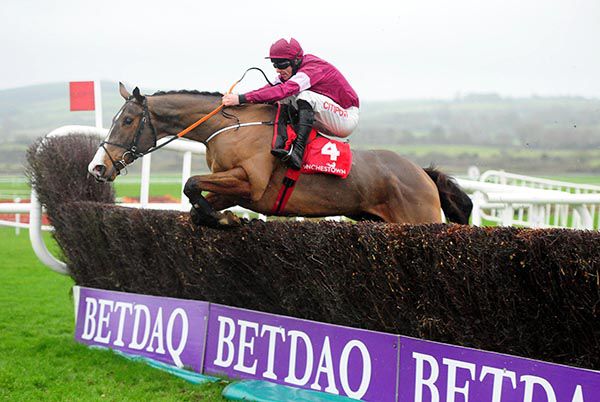 The champion trainer has saddled six previous winners of the Grade One contest, including five of the last seven. He has won the last three renewals with Douvan, Min and Footpad respectively.

Voix Du Reve made a flying start to his career over fences at Galway in October and followed up in impressive style in the Grade Two Craddockstown Novice Chase at Punchestown last month.

The six-year-old faces a tougher assignment on this occasion — with Gordon Elliott’s Supreme Novices’ Hurdle third Mengli Khan among his rivals- but Patrick Mullins, assistant to his father, is hoping Voix Du Reve can put it up to the likely favourite.

Mullins said: “Mengli Khan was the best horse over hurdles and he looked to jump well on his first run over fences in Punchestown, so he’s the one to beat.

“He loves jumping and the good ground will suit him.”

The Joseph O’Brien-trained Le Richebourg sets the standard on chase form after being narrowly denied by Elliott’s Delta Work in the Grade One Drinmore Novice Chase at Fairyhouse earlier this month.

Frank Berry, racing manager to owner JP McManus, said: “He came out of Fairyhouse good. He just ran into a good one there.

“He’s back in trip. It looks an ideal race and we’re hoping for a good run.”

O’Brien also saddles Us And Them with Henry de Bromhead’s pair of Ellie Mac and Mind’s Eye completing the six-strong field.