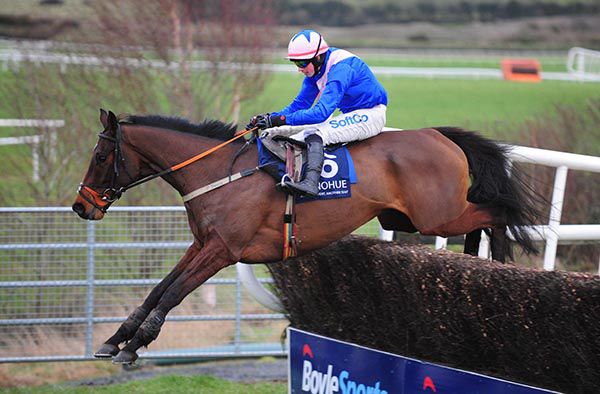 Riders Onthe Storm opened his account at the third time of asking over fences when claiming the Richard Maher Memorial Rated Novice Chase at Punchestown.

Tom Taaffe's charge jumped into the lead two from home in the two-miler and kicked clear turning for home, under Bryan Cooper.

The Scorpion gelding had his advantage reduced late on as Impact Factor stayed on but had a length-and-a-quarter to spare at the line.

The well-backed 2/1 winner (11/4 in morning) was taking a drop in grade today having finished third in Grade 1 company at Limerick over Christmas.

Cooper said afterwards:- “It was a good performance and after his run in Limerick he was entitled to do that. It rode a good race with a strong gallop and it suited me.

“The winning margin could have been a bit better as he pulled up a bit in front. He’s going the right way, and you would learn more in one of these races than you would in a beginners chase.

“He has options now and could go to Cheltenham for the novice handicap.

“Tom said he is a two and a half miles horse and don’t interfere with him. If he takes you there let him take you there. I was looking to pop the second last and he came up out of my hands.”