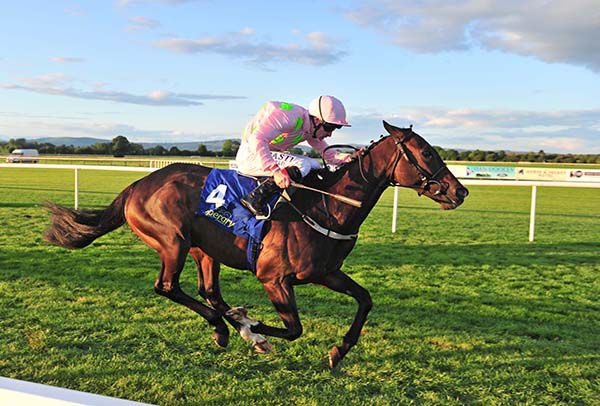 The Listed Edmund & Josie Whelan Memorial Listowel Stakes is the chief event of interest at the second stage of the Harvest Festival today. Riven Light victorious in this nine-furlong highlight in 2017, returns in search of further Kerry gains for Rich Ricci and Willie Mullins.

Kevin Manning is back aboard the seven-year-old for the first time since that win two years ago, and the son of Raven’s Pass has been lightly raced in the interim, only seeing action seven times.

Riven Light has taken in trips to Australia and South Korea in that time. He now reverts to the Flat having finished towards the rear in the Galway Hurdle last time out.

With a rating of 109 the Mullins runner sets the standard, although it is unlikely to be straightforward as 15 rivals aim to take him down.

From an initial entry of four Aidan O’Brien puts just Lancaster House into the mix. This three-year-old will bid to remain unbeaten after wins at Galway and Tipperary.

Willie McCreery, on the mark here in 2015 and 2016, has Tipitena (Declan McDonogh) and Up Helly Aa (Billy Lee) in contention. The pair have three-figure ratings and cannot be underestimated.

Jessica Harrington also has dual representation. Still Standing has changed ownership since he last ran. Stable jockey Shane Foley will don the silks of the Three D Partnership on this good money-spinner.

Harrington’s other hope, Marshall Jennings (Tom Madden), has work on having finished 10th here 12 months back. Cheekpieces are now tried on the seven-year-old.

The www.listowelraces.ie Handicap and the Irish Stallion Farms EBF Premier Nursery Handicap are excellent supporting races to the centre-piece.

Given the prize-money on offer these events unsurprisingly look very competitive.

Some will justifiably look towards progressive three-year-old Pearl Warrior in the www.listowelraces.ie Handicap.

A son of 2011 Melbourne Cup hero Dunaden, Pearl Warrior attempts to complete a hat-trick for the very much in-form Johnny Murtagh stable.

Andrew Slattery, currently battling it out with Oisin Orr at the head of the apprentice rider standings, has been booked for the spin.

Meanwhile, the Premier Nursery might see Troop Commander defy the assessor after the 11lb hike he received for a convincing Killarney win last month.