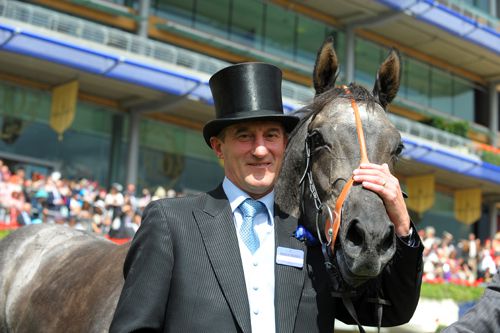 Kevin Ryan has been delighted with East’s preparation ahead of the Poule d’Essai des Pouliches at ParisLongchamp on Sunday.

The Frankel filly has had more races abroad than at home, having won her debut at Hamilton before being victorious at Saint-Cloud and going on to the Breeders’ Cup meeting, where she beat all bar the impressive Newspaperofrecord in the Juvenile Fillies Turf.

“She is in great form and everything has gone to plan. There has been a lot of rain in Paris, but we know she handles soft ground,” said Ryan.

“She was left in at Newmarket to keep our options open, but France was always the number one.

“When you make a plan, you stick to it, so that is what we decided in the end.

“She has grown and has got stronger. She is just a pleasure to train and we have had a lovely run into the race with her, so I’m very happy with her. There was no need to run her in a trial as she is a very easy filly to train.

“She has has been away from home and had a racecourse gallop, so there are no excuses there.

“She was unbelievable in America. She got there and hardly lost any weight, then she put weight on over the five or six days she was there. She has got a great constitution.”

Heading the home team is the unbeaten and supplemented Castle Lady for Alex Pantall.

Matematica brings top-class form to the table having been narrowly beaten in the Prix Marcel Boussac last year. She won her trial easily.

“It was only her second start in the Boussac. She got to the front and didn’t know what was happening. Only inexperience got her beat,” said trainer Carlos Laffon-Parias.

Andre Fabre runs Suphala, narrowly beaten in the Prix Imprudence over seven furlongs but a winner over a mile at two.

“I think stepping back up in trip will suit her, and the softish ground as well,” said Fabre.

“I don’t know if she quite good enough to win this race, but she’s going to run well.

“I’ve had no form with my three-year-old fillies this year, she’s the best one I’ve run so far.”