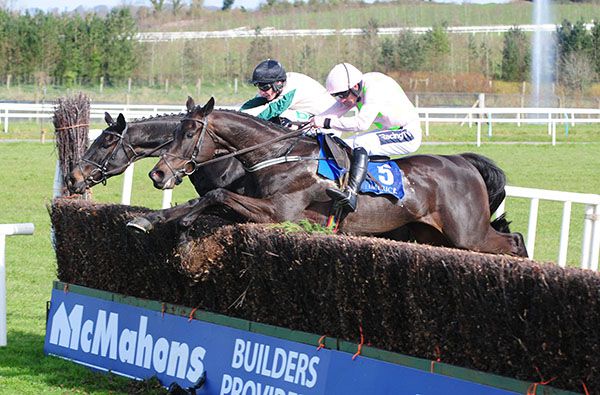 The market spoke loudly in favour of Burrows Saint in the Hugh McMahon Memorial Novice Chase at Limerick and he duly did the business in the Grade 3 contest.

Willie Mullins had won four out of the five previous runnings of the three-miler and Burrows Saint was supported from 2/1 into 6/5 favourite to enhance his record in the race.

Ruby Walsh held his mount up behind the leaders before producing him to lead at the second last.

He was followed through by stable-mate Robin Des Foret and that rival appeared to be travelling slightly better going to the last.

A better jump by Burrows Saint gave him the advantage and he picked up well on the run-in to post a four length winning margin.

The French-bred was following up on his beginners chase win at Gowran 22 days ago. It was his first time tackling three miles.

"Burrows Saint's jumping won it for him and Robin Des Foret hasn't got his confidence back yet. It was a good run from both of them and we will stay at three miles or even go further with Burrows Saint,” said Mullins.

"If he doesn't get into the Irish National I am happy to wait for next year. The way he galloped and jumped there, we could do that.

"Ultimately he will want a trip but the Ryanair Chase (2m4f) at Fairyhouse wouldn't be out of bounds either and he jumps well enough to go. If the ground came up soft who knows what might happen."