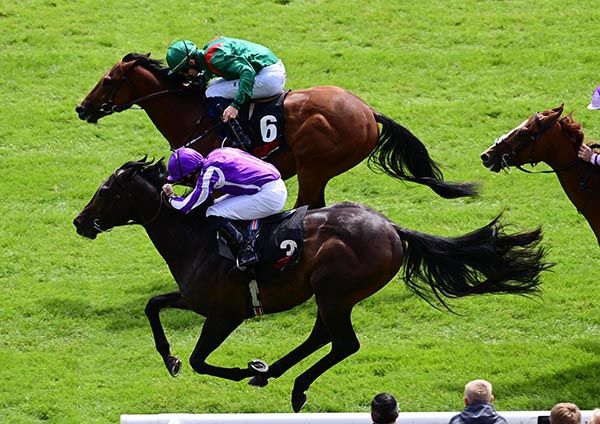 The Aga Khan-owned colt went to post even-money favourite for the Prix Jean-Luc Lagardere but faded in the closing stages after racing keenly.

It was a third straight run in Group 1 company by the Invincible Spirit colt who had been third in both the Phoenix Stakes and National Stakes.

He had edged out Blackbeard in the Group 2 Railway Stakes, also at the Curragh, back in June.

"He's good. He was a little bit tired for the first couple of days,” reported Murtagh.

"Looking at it firstly, I thought he was coming to win and just the last 50 yards, he did the same in the Curragh. I think he might be just a six-furlong horse on that ground.

"I thought he would get seven (furlongs) being an Aga Khan family, but his last two runs suggest he didn't get home the last bit so maybe six is his goal.

"The Commonwealth Cup is what we are training him for."

Heffernan grabs the headlines with 674/1 treble

Seamie Heffernan stole the limelight at Dundalk this evening with a 674/1 treble rounded off by a major gamble on Sand Castle in the concluding DundalkStadium.com Handicap.

Inishmot Prince makes it five wins this year at Dundalk

Inishmot Prince has proved a real star for Tom McCourt and young claimer James Ryan at Dundalk this year and recorded his fifth win since February in the William Hill Bet Boost Handicap.

Ampeson recorded his fifth win in just over 12 months when justifying good support in the featured William Hill Pick Your Places Handicap at Dundalk.

Leclerc continues to prosper on the sand

Leclerc recorded his second win in the space of nine days when justifying 7/4 favouritism in division two of the William Hill Racing Radio Apprentice Handicap at Dundalk.