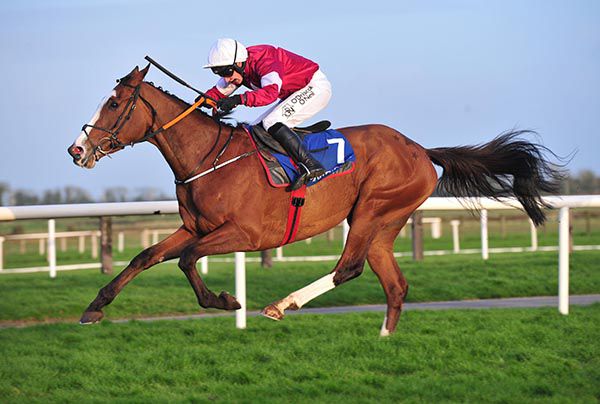 Tintangle drops back from the Grade One company she kept last time out when contesting the BetVictor Solerina Mares Novice Hurdle at Fairyhouse on Saturday.

This Grade Three over two and a quarter miles sees Tintangle attempt to end the unbeaten run of Henry de Bromhead’s Honeysuckle a task that will be aided by the 2lb she receives from the likely market leader.

Despite that small concession, it is still advantage Honeysuckle (Rachael Blackmore up). The point-to-point and dual hurdle victor is officially rated 135, some 5lb superior to Tintangle.

However, Tintangle put in a career best at the Leopardstown Christmas Festival when last seen in action, finishing third behind the impressive Aramon in the Paddy Power Future Champions Novice Hurdle.

Owned by Gigginstown House Stud and trained by Gordon Elliott, the well-related daughter of Yeats will again be partnered by Jack Kennedy.

“We never go into any race expecting anything, but she’s entitled to take her chance and the extra trip (two and a quarter of miles) will suit her well,” said Gigginstown’s Eddie O’Leary.

“She’s a staying mare and she ran brilliantly last time over two miles.

“I haven’t looked at the opposition — we just run our own.

“She’s getting a little bit of weight. That’s from higher-rated runners than herself, though.”

One of those opponents with a superior mark is Willie Mullins’ Robin De Carlow (Ruby Walsh).

Dropping in trip, this Robin Des Champs mare must bounce back from a Cork disappointment in December. Her supporters will doubtless be buoyed by a treble for the stable at Gowran on Thursday.

Backers of Awayinthewest meanwhile, will point to the substantial experience already amassed by Pat Fahy’s charge, and the consistent sort is certainly not without a chance under Paul Townend.

A course and distance scorer a fortnight ago, Kingston Girl steps up from maiden company for Luke Comer and Ricky Doyle. This one looks as if she is on the improve.

The field is completed by Western Victory (Colin Bowe and Sean Flanagan) and Cotton End (Mag and Danny Mullins).