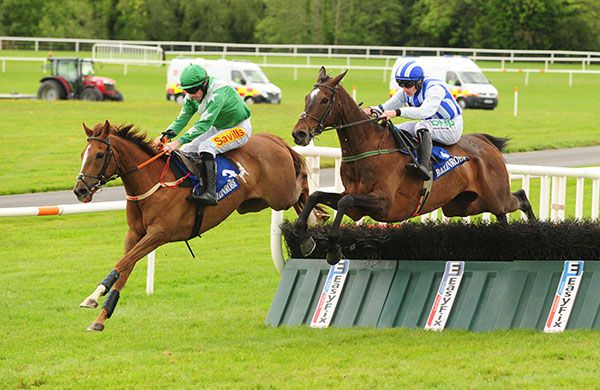 Paul Townend made it back-to-back Ballinrobe doubles as he drove Castle North home in the shadow of the post in the McHale Fusion Maiden Hurdle.

The seven-year-old gelding travelled smoothly into the race as he hunted down Pakens Rock and Room To Roam after the penultimate flight.

He swept past the under pressure Room To Roam approaching the last and had Pakens Rock well in his sights.

To Pakens Rock's credit he knuckled down for a scrap and refused to yield as Castle North challenged on the outer with his head held high.

Under a strong drive, Castle North got up in the final strides to score by half a length at 4/1 having been backed in from 7/1.

This was also a double for Willie Mullins who supplied Stratum for Townend in the opener.

Paul Townend said: “I thought going to the last that I’d get Sean (Flanagan, on Pakens Rock). I wasn’t sure then off the bend but when he did knuckle down he eventually got by him.

“He’s an awkward ride and I was glad they went such a gallop as it made my job a bit easier. He’d a good run here the last day but he’s a big horse for these summer tracks.

“He handled the ground fine and at least he’s got his head in front now. He’s been a frustrating horse and we’ve had to try a lot of different things with him.”