Trueba another for in-form McCullagh 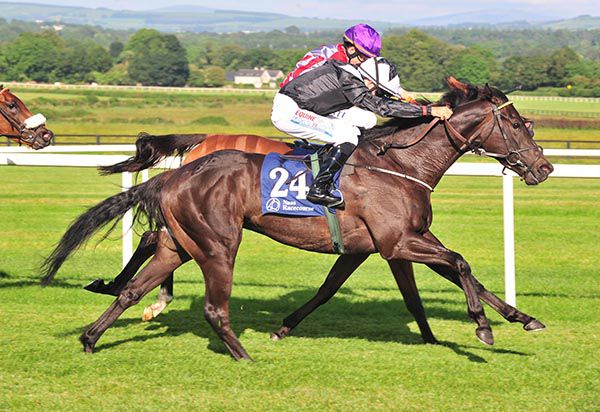 Niall McCullagh recorded his fifth success in the last 10 days, as he guided bottom-weight Trueba to victory in the Naas Town Goes Racing 6th July Handicap.

Trained by Johnny Murtagh, the three-year-old showed little on his first four starts, before putting in an improved performance to take sixth at Navan last month.

He since finished a close-up third to Very Smart at Down Royal on Saturday last and was sent off at 8/1 this evening in the colours of owner Paul McKeon.

Drawn out wide in stall 22, the bay gelding was settled behind the leaders, coming with his challenge from the two furlong pole.

He was ridden and had a good tussle with Powersville inside the final 200 yards, getting the upper hand close home, going on to score by three parts of a length.

Powersville, who was returned at 5/1, had to settle for second under Shane Foley, while Noirvento (11/2 into 4/1f on-course) and Handsome Maverick (10/1) were third and fourth respectively.

"That will ease the pain of getting beat last week!" said Murtagh.

"We've been giving out about all these draws as he was drawn 17 last week and 22 today.

"I thought he was going to struggle today from the draw. Niall said he was happy enough that last week he ran well in a similar sort of race and today we'd try and get him over a bit.

"Maybe we're reading too much into the draws here after the first couple of races today. Maybe it'll even itself out because there never was much of a bias here before on this track.

"Niall got him over and he said a stiff six or easy seven is his trip. Hopefully he can start improving now and creeping up the handicap a bit."

R.P. Cleary, rider of Emily Grace trained by M.C. Grassick, reported to the Clerk of the Scales that his mount lost her action.