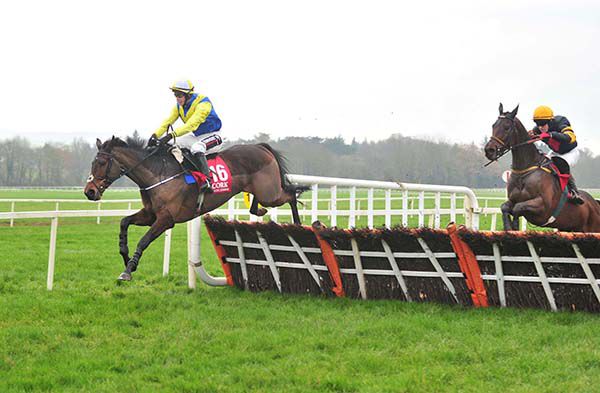 The Justin Carthy-owned and Joseph O'Brien-trained Us And Them looked a nice recruit to hurdling when landing the www.racinghomeforeaster.com Maiden Hurdle at Cork.

J J Slevin's mount finished second, third and fourth in three bumper outings but he'll be better at this game judging by a three length success over the dead-heating second placers, Cask Mate and Manamite (4/7 favourite).

Manamite runs for J P McManus, and he also had the fourth home, a promising youngster bought out of the point-to-points, Minella Times

"He's a nice horse and I was surprised that he didn't win a bumper. He jumped like a buck, and he's one to look forward to. Hopefully its onwards and upwards," reported Slevin.

B.J. Foley, rider of Churchtown Glen trained by Michael Winters, reported to the Clerk of Scales that his mount hung badly left and jumped left.

M.J. Bolger, rider of Clear View trained by A.J. McNamara, reported to the Clerk of Scales that his mount hung very badly throughout.

D.E. Mullins, rider of Mary Sun (FR) trained by W.P. Mullins, reported to the Clerk of Scales that his mount stopped quickly and was pulled up.

P.D. Kennedy, rider of Moll Dote trained by John J. Walsh, reported to the Clerk of Scales that he lost an iron in running.

The Turf Club Veterinary Officer examined Churchtown Glen, trained by Michael Winters, at the request of the Stewards and reported the animal to be post race normal.

The Turf Club Veterinary Officer examined Mary Sun (FR), trained by W.P. Mullins, at the request of the Stewards and reported the animal to be post race normal.

The Stewards received a report from Mr. H.T. Hynes , Turf Club Clerk of the Scales, regarding the fact that P.D. Kennedy , rider of Moll Dote , weighed in at 1.7 lbs lbs overweight.

Having considered the evidence, the Stewards were satisfied that P.D. Kennedy was in breach of Rule 231 and they therefore suspended him for 1 raceday.

The Stewards fined A.J.Martin, trainer, €350 for failing to lodge a passport in respect of The Mouse Doctor in accordance with Rule 90.

The Stewards allowed the horse to run on receipt of the trainer's written assurance that the passport and vaccinations were in order.

The Stewards enquired into the running and riding of Churchtown Glen, ridden by B.J. Foley, and trained by Michael Winters.

Evidence was heard from the rider and trainer concerned. B.J. Foley stated that his instructions were to jump off in mid division, give his mount a good education as he is a young, green horse and to finish as close as possible.

B.J. Foley also stated that in running his mount hung badly left and jumped left, that he made attempts to keep horses on his outside in order to prevent his mount from travelling recklessly across the track, and that he made an attempt to challenge for the race turning into the home straight.

The Stewards noted that B.J. Foley made a report to the Clerk of the Scales. Michael Winters stated that B.J. Foley knows this horse fairly well, that the horse has been a difficult ride on his previous two runs and that his charge has improved significantly since his last run.

M. Winters further stated that he was delighted with how B.J. Foley rode the race considering that Churchtown Glen is an awkward horse to ride.

The Stewards also received a report from the Turf Club Veterinary Officer who stated that Churchtown Glen was post race normal.

Having viewed the recording of the race and considered the evidence, the Stewards found both rider and trainer to be in breach of Rule 212 A (i), in that Churchtown Glen was not allowed to run on its merits.

Having considered their records in this regard, the Stewards fined M. Winters €6,000, suspended B.J. Foley for 21 Racedays and ordered him to forfeit his riding fee, and suspended Churchtown Glen for 90 days.

Mr. Philip Mc Lernon, Chairman, exempted himself from this hearing which was chaired by Mr. Richard Rohan.