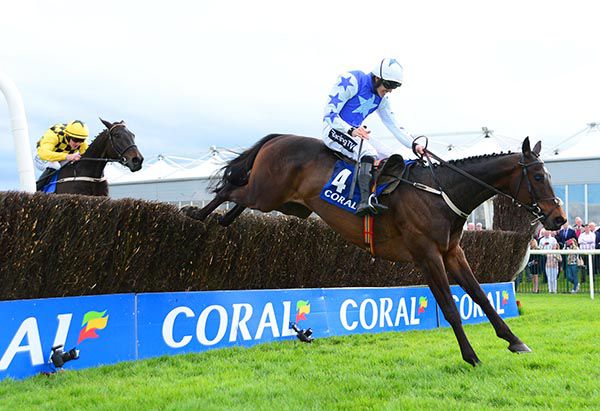 After riding a couple of hundred winners short of 3,000, and about 20 short of 2000 in Ireland, 2 Gold Cups, 2 English Nationals, 3 Irish Nationals and 59 Cheltenham festival winners Walsh brought the curtain down on a glorious career.

Supplying Willie Mullins with his 200th winner of the campaign, Walsh showed this was a hugely significant success as he waved at the crowd crossing the line two lengths ahead of fellow Closutton horse and Gold Cup hero Al Boum Photo

Walsh overcame much adversity, the 12 time Irish champion coming back after breaking his leg 3 times, doing his spleen, a vertebrae in his back and his hip twice.

If Rathvinden had won the English National he'd bowed out then, but it was very appropriate for the legendary rider signing off at his home track.

"I've been so lucky from day one to ride so many incredible horses. I never dreamt that I'd get to ride the likes of the equine athletes that I rode," said Walsh.

"No jockey is any good without the horses. The horses are such a huge part of it. From the very beginning - Imperial Call here 20 years ago to Alexander Banquet - Kauto Star, Big Buck's, Master Minded, Denman, Hurricane Fly, Quevega, Annie Power, Kemboy, Un De Sceaux, you name them!

"In anyone's lifetime I rode all the best ones.

"Everyone gets their fair share (injuries) and I probably got a fraction more than my fair share. Someone has to have a high average for the lads at the low end and I was probably at the higher end of that.

"To me, as I was always thought as a kid, it was all about the big day. My father thought that to me.

"I'd suppose if Rathvinden had won the Grand National I probably would have bowed out on him - there's no bigger stage than that.

"That didn't happen but after speaking to Gillian (wife) about it a good while ago there comes a time when you just want to do something else.

"I've been a jump jockey for 24 years, I'm nearly 40, and I thought I want to do something else for the next 24 or 5 years. I'm lucky enough to have great contacts and sponsors in RacingTV, the Irish Examiner and Paddy Power. Instead of them being bit part players in my life they are going to be my life now.

"I think it's very unfair to compare horses from different generations. It's like comparing athletes or footballers or rugby players or anything.

"You can only be the best in your day, or on your day. Is Kemboy a better horse than Al Boum Photo? He was today but he mightn't be next March.

"That's what drives sport. Who is the best footballer - Messi or Ronaldo? Who knows - they are two brilliant footballers. That's the debate and argument and that's why people love sport.

"I don't think I'll be going training - not in the enviroment in this country. Horses will always be part of my life. I love working for Willie and I'll continue to do so.

"It'll be RacingTV, the Irish Examiner. I enjoy great relations with them and with Paddy Power. Instead of them being on the side of riding they'll be getting all my attention now and in the future.

"I don't think I'm going to miss the riding. When I broke my leg off Al Boum Photo in Cheltenham last year the thoughts of another 4 months of rehab....

"I'll be honest, without Enda King's help in Santry I wouldn't have even got the last 3 years out of my career.

"Physically what I've put my body through. Brendan Doyle for 20 odd years, Lord have mercy on him. It was those guys that got an extra 3 or 4 years out of me that physically were amazing.

"I look across the weigh-room at Richard Johnson and I marvel at him. How at his age he has such commitment and drive to do what he does, to me is amazing.

"You can't get inside a horse's mind and to think that you can master or control the horse - you can't.

"You're 10 stone and you're trying to control half a tonne. You can only try and get it to cooperate slightly in the way you want it.

"You can't get inside its mind or master it. You have to try and guide it and hope you get it right.

"No jockey is any good without the good horses and I rode all the equine stars."

Rachael Blackmore, rider of Monalee trained by Henry de Bromhead, reported to the Clerk of Scales that her mount was pulled up having lost his action.

The Irish Horseracing Regulatory Board Veterinary Officer examined Monalee, trained by Henry de Bromhead, at the request of the Stewards and reported the animal to be post race normal.