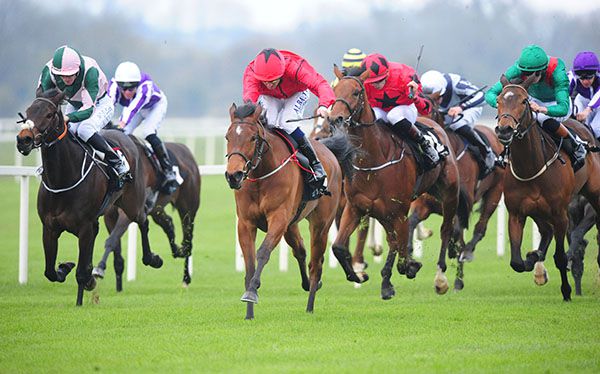 Lady Wannabe who is out of a Group 3 winner in Wannabe Better, came forward plenty for her debut run last season, as she took the opener at Cork, the Lengthen The Odds With BetVictor Fillies Maiden.

A well-beaten last on her first start at Leopardstown, she was allowed go off a 20/1 chance this afternoon with Chris Hayes in the saddle.

Settled behind the leaders on the inner, the daughter of Camelot was angled out to challenge from the three furlong pole.

She was ridden from over a furlong out and gradually got to the front inside the final furlong, going on to score comfortably by two lengths.

Newcomer Alezia (2/1fav) ran on well to take second under Oisin Orr for Dermot Weld, while 100/1 chance Lighthouse Lady was another half a length back in third for Ronan Whelan and Edmond Kent.

Winning trainer Fozzy Stack said afterwards: "I thought she'd win first-time out last year but she ran absolutely stink. I don't have a notion why but it goes back to the old saying about two-year-olds first-time out.

"She was smart today and her sister, by Galileo, made 1.5 million at Newmarket last year so she is valuable and we'll be going black-type hunting.

"She toughed it out well and her mother was tough and won a couple of Listed races and a Group 3 race so if she turns out as good as her she'll be alright."