Warrior lands a gamble under Brouder 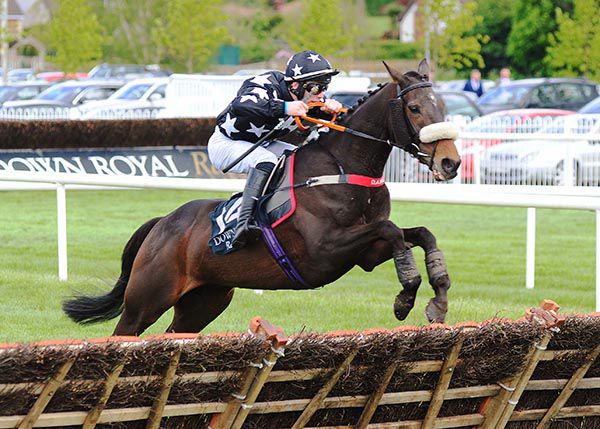 Unsuccessful on his previous fifteen starts, the son of Heliostatic was a good second to Breesy Mountain at Punchestown on New Year's Eve, but since disappointed on his next two outings.

Available at 16/1 in early shows, the Frank Reynolds owned seven-year-old opened on-course at just 6s, before going off a 4/1 chance.

Settled in second, he improved to lead four out and went clear from the second last, going on to score easily by eight lengths. Oromo who was returned the 5/2 favourite, finished second under Luke McGuinness for Karl Thornton, while Musical Ava (16/1) and Pretty Little Liar (10/1) were third and fourth respectively.

McLoughlin said afterwards: "On his Punchestown run (you'd think there was a race in him). I don't know why but he was disappointing the last twice.

"I just said to the chap to make more use of him - he just kept going the best and he jumped well and he kept going to the line.

"I'll hold fire, I'd say he's the sort of lad who wants to be fresh. We'll hold fire for a couple of weeks and see what the handicapper does.

"Frank Reynolds (owner) is not here today. He has four horses with us. He's from Celbridge."

The Stewards enquired into an incident entering the final turn involving James Boru ridden by Mr N. McParlan, Cadougarde (FR), ridden by R.A. Doyle and Mr Jacaranda ridden by E. O'Connell, where it appeared that Cadougarde ran short of room and collided with the rails. Evidence was heard from the riders concerned. Having viewed the recording of the race and considered the evidence, the Stewards were of the opinion that Mr. N. McParlan was in breach of Rule 214 in that he had ridden improperly, and having considered his record in this regard suspended him for 3 racedays.

J.M. Moore, rider of Sillogue Pio trained by Gavin Cromwell, reported to the Clerk of Scales that his mount burst a blood vessel.

The Irish Horseracing Regulatory Board Veterinary Officer reported to the Stewards that Sillogue Pio trained by Gavin Cromwell was found to have blood on the nostrils post race as a result of exercise induced pulmonary haemorrhage.

C.A. Landers, rider of Canford Lady trained by Seamus Fahey, reported to the Clerk of Scales that his mount struck into itself.

R.A. Doyle, rider of Cadougarde (FR) trained by Ross O'Sullivan, reported to the Clerk of Scales that his mount stopped very quickly and pulled up.