Western toughs it out best in the Navan feature 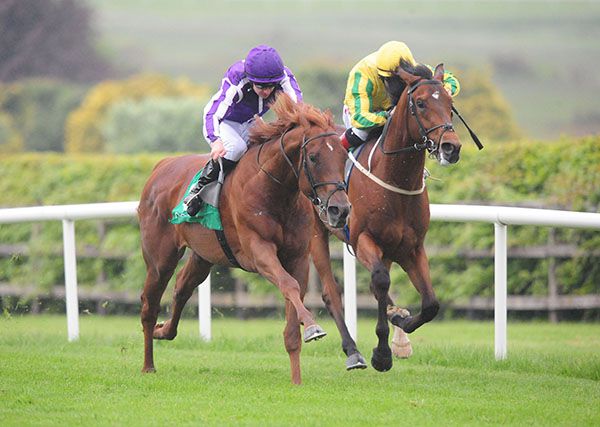 Western Australia toughed it out best to take the feature at Navan this afternoon, the Listed Irish Stallion Farms EBF Yeats Stakes.

Successful on his third start at Gowran in September, the Aidan O'Brien trained chestnut rounded off his two-year-old campaign in the Group 1 Vertem Futurity Trophy at Doncaster, running a huge race there to take third.

He finished second in a Listed contest at Dundalk on his return to action, and was since well-beaten in the Fielden Stakes at Newmarket.

Upped in trip to a mile and five for the first time this afternoon, the son of Australia was sent off a 2/1 chance under Donnacha O'Brien.

Settled in second behind the front-running Pythion he was pushed along to challenge that rival with over two furlongs left to race.

The pair were soon engaged in a battle, with Western Australia getting on top inside the final 150 yards, going on to score by a length and a half.

Pythion (6/1) ran a brave race but ultimately had to settle for second under Colin Keane for Ger Lyons, while the 5/4 favourite Masaff could only manage a disappointing third, another two and three parts of a length behind.

"He did it well. He probably had the best form in the book and it was just a question of whether he stayed or not, he seemed to stay it out well," the winning rider said.

"The Australias improve for a step up in trip, he stayed well himself and he seems to be passing that on."

When asked if the winner might get even further he added: "I think it would be no problem to him."