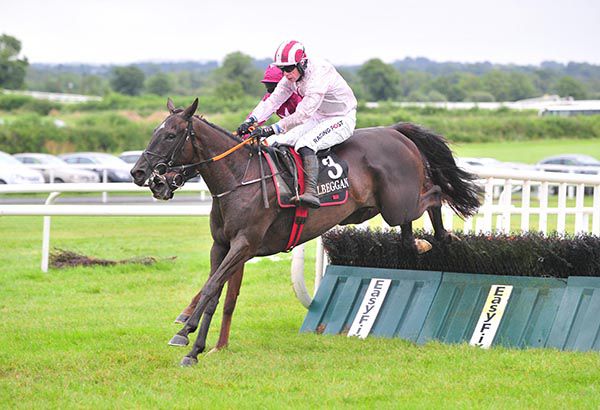 Westland Row can complete a hat-trick for Gordon Elliott and Denis O’Regan in the opening EY Chase on day two of the August Festival at Tramore.

After winning a beginners’ chase at Kilbeggan in July, he returned to the same track last weekend and readily defeated stable companion Tombstone over hurdles.

The Oscar gelding can get the better of higher-rated pair Pylonthepressure and Barra both coming here after unplaced runs when quietly fancied in the Galway Plate.

Willie Mullins has a couple of good chances on the card, notably in the Brennan’s Pharmacy INH Flat race with Getaway Gorgeous runner-up to the classy Gypsy Island on her only outing to date at Ballinrobe last year.

Samcro’s half-brother Think Positive has shown promise in bumpers and can complete a double for his trainer by making a winning start over obstacles in the Definite Ruby Maiden Hurdle. Daisy Chicks was disputing the lead when coming down two fences from home at Roscommon last week and Eoghan O’Grady’s mare can gain compensation under Philip Enright in the MM Halley & Son Solicitors Handicap Chase. Little Lady Lu after a creditable fourth at Sligo, has a leading chance for James Nash and Gavin Brouder in the Noel Ryan Tree Surgeon Mares’ Maiden Hurdle. Tintown Robin for local handler Vincent Halley and Sean Flanagan, can confirm Wexford form with Ourauldman and Basil’s Boy in the Assembly Techniques Handicap Hurdle, while Darragh O’Keeffe can continue his fine run of form aboard Do Ya Feel Lucky for Harry Kelly in the ELC Laser Group Mares’ Handicap Hurdle.