A good start to a big weekend for Donoghue 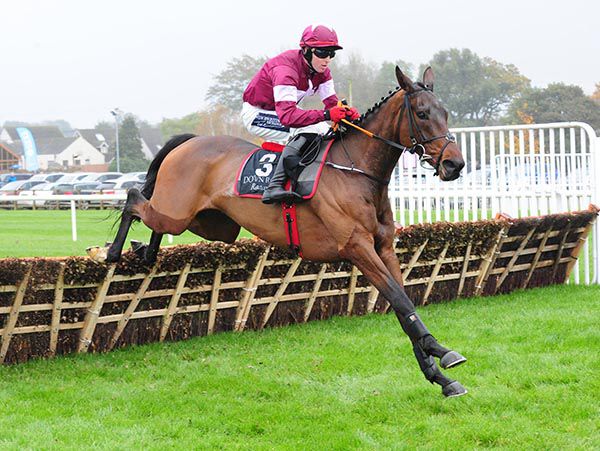 Fury Road (8/11 fav) made just about all the running and had the CBRE Property Experts Maiden Hurdle sewn up from the third-last flight as he strolled home by eighteen lengths in the hand of Keith Donoghue.

It was a good start to an exciting weekend for the jockey, with high-profile rides on Samcro and Delta Work still to come over the two days at Down Royal. Face The Odds (11/4) was never really competitive but kept on into second spot, with Tecumseh Sherman (12/1) finishing tired in third, another nine lengths back, having tried to put it up to the Gigginstown-owned favourite.

The winner, by Stowaway, won a point-to-point for Pat Doyle, and landed one of his three starts in bumpers when scoring at Fairyhouse in February. He has worn a tongue-strap for his two racecourse victories, which he didn’t have for his two defeats in bumpers.

"A big couple of days for Keith Donoghue and he showed there that if he has the ammunition he is good enough, said winning trainer Gordon Elliott.

"He's a great man over a jump and always was.

"We thought he was a machine in his bumpers but we had to give him an operation. I'd say a trip looks very good for him.

"He looked comfortable the whole way. He could go for a three miler over Christmas and could drop back to two and a half. He's a good horse."