All credit to Hayes as Bull wins easily on chasing debut 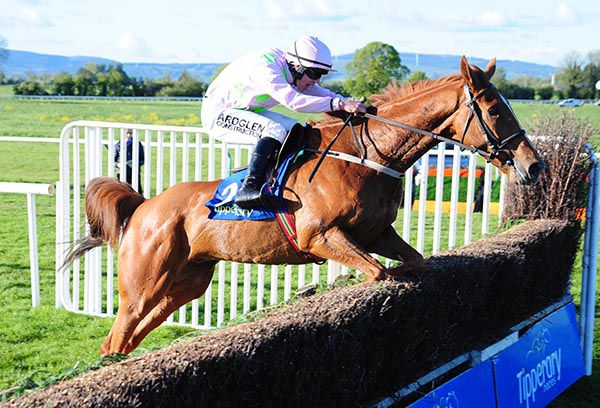 Brahma Bull made the perfect start to his career over fences, as he ran out an easy winner of the Berkshire At Kedrah House Stud Beginners Chase.

Successful on his first four starts, the Willie Mullins trained chestnut then finished ninth to Samcro in the Ballymore Novices' Hurdle at the 2018 Cheltenham Festival.

He was sixth behind Next Destination at the Punchestown Festival the following month, and returning to action this evening for the first time since, he was sent off the 13/8 favourite.

Settled just behind the leaders by Brian Hayes, the eight-year-old gelding raced keenly, but still eased to the front approaching two out and soon went clear.

A slow jump at the last mattered little, as he went on to prevail by fourteen lengths in the colours of Rich and Susanna Ricci. The Mulcare Rover (14/1) finished second under Cathal Landers for Dot Love, while Western Honour who was the 2/1 second favourite, jumped badly right and eventually finished fourth.

The two fences down the back straight were omitted due to the low lying sun, which meant just ten fences were jumped in this two mile seven furlong contest.

Patrick Mullins said afterwards: "All credit to Brian as none of our usual jockeys were sticking their hands up to ride him as his schooling hasn't been fantastic and he is keen and he hangs. Brian deserves huge credit and rides out in our yard every week.

"He has a big engine but hasn't been easy to train and isn't easy on himself. He is awkward but Brian got him into a good rhythm.

"We'll step him up now and the way he travelled he could come back in trip. We'll find a novice chase for him now."

The Irish Horseracing Regulatory Board Veterinary Officer reported to the Stewards that Dawn Raider trained by Patrick G.Kelly was found to have blood on the nose as a result of exercise induced pulmonary haemorrhage.

The Irish Horseracing Regulatory Board Veterinary Officer examined Western Honour, trained by Gordon Elliott, at the request of the Stewards and reported the animal to be post race normal.

J.W. Kennedy, rider of Western Honour trained by Gordon Elliott, reported to the Clerk of Scales that his mount jumped violently to the right during this race.

Owing to the low lying sun, the Stewards granted permission for fence 3 and 4 to be omitted from all circuits of this race