All eyes on Winter Escape at Punchestown 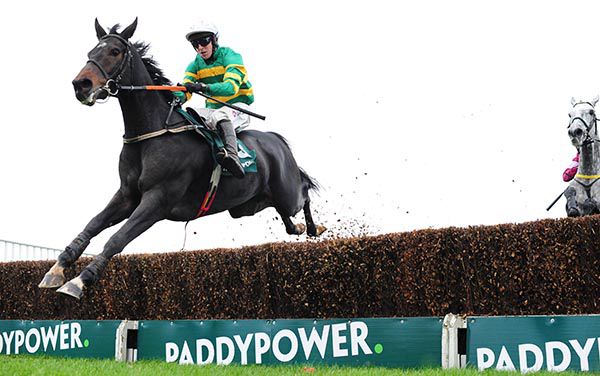 Winter Escape bids for a third successive victory over fences in the Total Event Rental Novice Chase at Punchestown on Sunday.

Formerly trained in Britain by Alan King, the JP McManus-owned eight-year-old joined Aidan Howard last year and the change of scenery appears to have had the desired effect.

After finishing second on his chasing debut and his first start for his new trainer at the Galway Festival last summer, Winter Escape went one better at the same track in September and followed up with an impressive success at Cork in early November.

He carries a penalty as he goes in search of back-to-back Grade Three wins this weekend.

Howard said: “He’s in good form and we’re hoping for a good run.

“We didn’t go to the Drinmore in Fairyhouse because the ground wasn’t suitable and we also missed a race at Naas, but I think we have to go on Sunday really if we’re going to go for the race in Leopardstown (Flogas Novice Chase) next month.

“A bit of rain would definitely help, but we’re happy with him and we’ll see how he goes.”

Winter Escape heads a nine-strong field for the two-and-a-half-mile contest.

Gordon Elliott has a strong hand with Ben Dundee, Blow By Blow, Gun Digger, Poli Roi and Cubomania all in the final field, although the latter was also declared for Saturday’s Dan Moore Memorial Chase at Fairyhouse.

Henry de Bromhead is looking forward to saddling A Plus Tard after he opened his account over fences in impressive style at Naas last month.

De Bromhead said: “He’s in good shape, everything has gone well since Naas and this race has been his aim since the.

“He is only five so hopefully there is more to come from him and we’re looking forward to seeing how he gets on at this level.

“His run here should tell us what direction we should be taking with him over the next couple of months.”

The Mouse Morris-trained Beyond The Law and Jessica Harrington’s Jetz complete the line-up.

It could be another big day for McManus, with French recruit Elixir D’Ainay making his Irish debut in the Sportinglife.com Maiden Hurdle.

The five-year-old won a bumper in his homeland last November and the fact trainer Willie Mullins has given him an entry in the Grade One Chanelle Pharma Novice Hurdle — formerly the Deloitte — at Leopardstown next month suggests he has shown plenty on the gallops at Closutton.

A field of 11 runners have been declared for the Punchestown Amateur National Handicap Chase.

Likely contenders include De Bromhead’s Aherlow, the mount of Mark O’Hare, and Undressed, trained by Mullins and ridden by his son, Patrick.

However, the latter has something to prove after pulling up when an odds-on favourite at Limerick over the festive period.