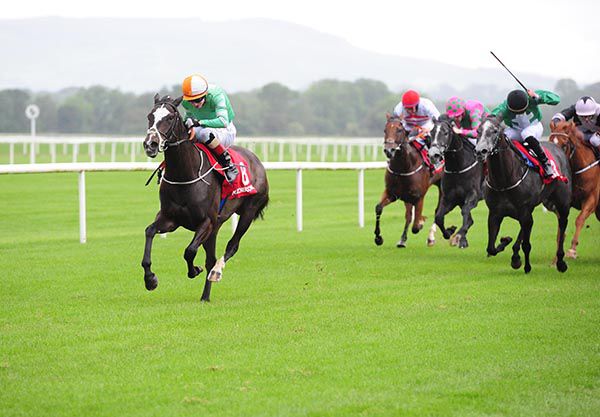 Aspen Belle will bid to quickly follow up in the Irish Stallion Farms EBF Fillies Handicap at Sligo.

The Pat Martin-trained six-year-old was an easy winner at Cork on Friday, but was hit hard by the handicapper as a result — going up 11lb.

She will carry just a 6lb winner’s penalty this evening, though — and with Killian Leonard again on board, the daughter of Roderic O’Connor looks the one to beat. Olay Power who won on her penultimate start at the venue, is an obvious danger. She carries only 8st 6lb, while Bonnie Park and handicap debutant Keepthebestsideout are other leading contenders. Ideal Pal is another aiming for a swift follow-up success, as he lines up in the feature Bet With Tote For Convenience Rated Race.

Also a winner at Cork on Friday, when the subject of plenty of market support, the Michael Mulvany-trained gelding faces just three rivals in this mile-and-a-quarter contest.

The 83-rated Third World sets the standard. He was fifth in the Madrid Handicap at Naas on his seasonal debut, but has been disappointing on his most recent outings at Navan and the Curragh respectively. Scotts Honor has some decent snippets of form to his name, and it will be interesting to see how he fares in first-time blinkers — while Hereia completes the line-up, having his first start on grass.

Andy Slattery trains Hereia, and he appears to have strong claims with Check My Pulse and Sunset Nova in the Play The Tote Superfecta On Every Race Median Auction Race.

On a mark of 81, the former is the highest-rated runner in the field — while Sunset Nova is tried in blinkers for the first time after going down narrowly on his last two starts.

Ben Coen takes the ride on Check My Pulse, and he will be aboard Grove Hill in the opening Tote Supports Sligo Racing Claiming Race.

A good fourth in a similar contest at Gowran last month, the daughter of Millenary steps up to a mile and a half — and should give a good account of herself in what is a weak affair.

Getaway Katie Mai, who a won Grade Two bumper at Aintree last year, is the eye-catching name in the concluding Tote Goes Twilight At Sligo Maiden.

John Queally’s six-year-old disappointed in the valuable Mayo Handicap Hurdle at Ballinrobe on her last start, but will be expected to bounce back as she makes her debut under Flat rules. Rag Tatter Teddy Boy and Takeachancejimmy appear the ones to focus on in Tote Supporting Irish Racing Handicap — while the consistent Castle Guest should go close in the remaining race on the programme, the Tote Free Race Day Tickets Handicap.