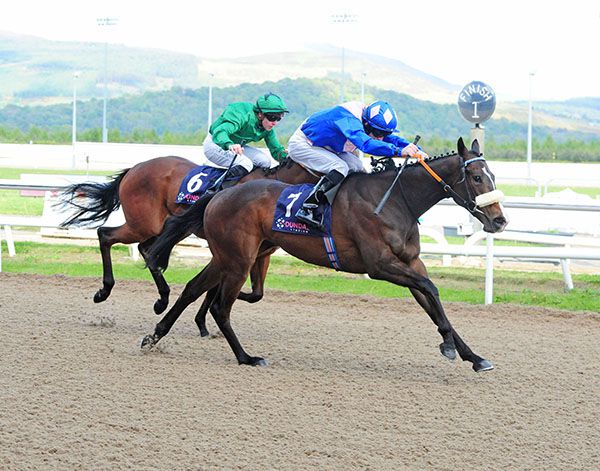 Windham Belle left a disappointing debut effort well-behind her, as she made all to take the opener at Dundalk, the Foran Equine EBF Auction Maiden.

Sent off a well-backed joint-favourite at Naas last month, the daughter of Anjaal failed to make an impact on that occasion, and finished eleventh of fifteen.

Trained by Willie McCreery and ridden by Nathan Crosse, the bay victor was sent straight to the front this evening, and was pushed along a furlong and a half from home, as Glow Worm and Daughter In Law tried to challenge.

Ultimately neither of those two could get to Windham Belle (6/1), who kept on well for pressure in the closing stages, going on to prevail by three parts of a length.

Glow Worm (2/1) had to settle for second under Leigh Roche for Jack Davidson, while the well-backed Daughter In Law (6s in early shows and from 15/8 into 6/4 favouritism on-course) was a further length and a half back in third for Mark Gallagher and Kieran Cotter.

Owned by Carmel Delaney, Windham Belle was bought for just E7,000 as a yearling, and is closely related to a whole host of winners.

Willie McCreery said afterwards: "I was very disappointed in Naas - I fancied her in Naas because the conditions of the race suited her like today. She came up on the bad ground and there is a huge bias in Naas at the minute.

"I told him (Nathan Crosse) 'you have to get her out sharp today' because she has plenty of speed and I said to be careful going round the bend because she has never been round a bend. She was good and professional.

"She had been working very well before Naas and I was very disappointed in Naas.

"I'm delighted as she was only a seven grand purchase for a new woman (Carmel Delaney) who would be a cousin of John O'Dwyer who bred the Champion Hurdle winner Rock On Ruby. He introduced me to her."

L.F. Roche, rider of Glow Worm trained by Jack W. Davison, reported to the Clerk of Scales that his mount didn't handle the surface.