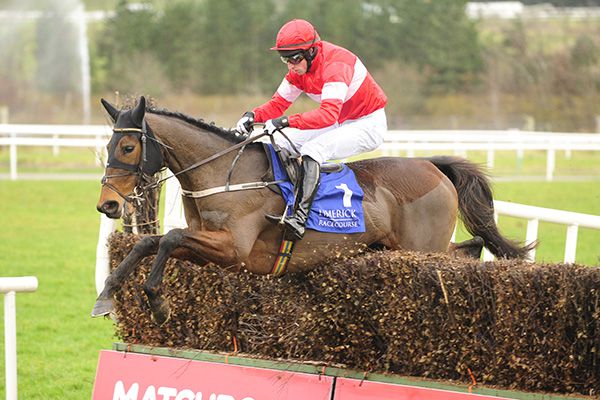 Cut The Mustard (7/4 out to 7/2) impressed in the Limerick Racecourse Vets Mares Beginners Chase, on her first start over the larger obstacles.

She did make a mistake at the second alright, but the Sullivan Bloodstock Limited-owned French-bred was good when she warmed into it.

Cut The Mustard’s fellow Willie Mullins runner, the market-leading Ifyoucatchmenow (9/4) eventually faded from her pace-setting role into a finishing position of fourth.

Meanwhile under Mikey Fogarty the victor travelled well into second after three out.

She improved to lead before two out where she jumped right, before soon asserting, keeping on well to easily defeat Denham Hana by fourteen lengths.

"She was very good and had the hurdle mark to put in a performance like that," said Fogarty.

"She warmed up into her jumping well and when we got racing she was good. She is a fine big strong mare and she should be able to go on further than that.

"For her first run of the year you'd have to be happy with her.

"I'm in with Willie (Mullins) a few days a week since I came back and it is a good place to work and I'm learning a lot there."

At the request of the Stewards, S.W. Flanagan, rider of Half The Odds trained by Noel Meade, reported to the Stewards' Secretaries that his mount tired in the latter stages of this race.

The Irish Horseracing Regulatory Board Veterinary Officer examined Half The Odds, trained by Noel Meade, at the request of the Stewards and reported the animal to be blowing hard post race.