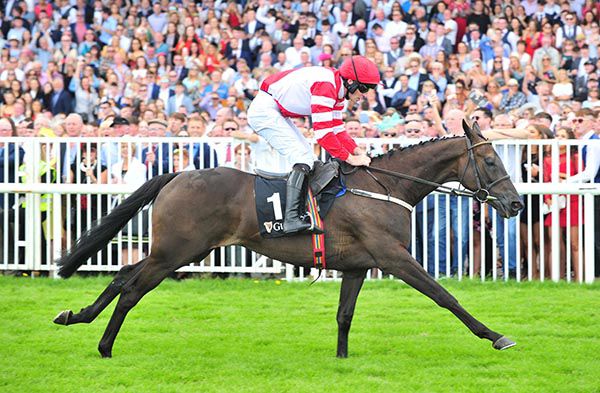 Dandy Mag did it well from the front off a 781 day break on chase debut in the Guinness Beginners Chase at Galway.

Owned by Grant Mercer and Caren Walsh, the Willie Mullins runner drifted from 7/2 out to 9/2 as money came for Martin Pipe victor Early Doors also a first-timer over the larger obstacles.

His jumping wasn’t without blemish but he stayed on in the straight for second.

He was two and a half lengths adrift of Dandy Mag (David Mullins up) whilst there was three parts of a length to From Eden in third.

Also in the J P McManus silks Minella Times was four and a half lengths back in fourth.

Said Willie Mullins afterwards: "He is not the biggest but being a half-brother to Vroum Vroum Mag the jumping comes naturally to him.

"His owner (Grant Mercer) missed coming over as he was away on business and couldn't get flights this morning.

"I would never be in favour of a rider riding in a beginners chase with big rides coming up at any meeting. I didn't let Paul ride for the past week and said 'I want you at Galway' and not at Ballinrobe or where ever and the way I look at things is I want my top jockeys riding at top meetings."